This week I checked on vine maturity of our variety trial under 150 units of total N vs. 300 units of total N. It was obvious that for early varieties like Agata and Colomba, vines were senescing and dying under both the low (Figure A.) and high N rates (Figure B.), and we couldn’t tell the difference between the two N treatments. For late varieties like Dakota Trailblazer, flowers can still be noticed and vines were vigorously growing under both N rates, but yellower canopies were observed under the lower treatment (Figure C.). We will vine kill the early varieties later next week and harvest them in the end of August. The late varieties won’t be killed until September 10th and harvested in the last week of September. 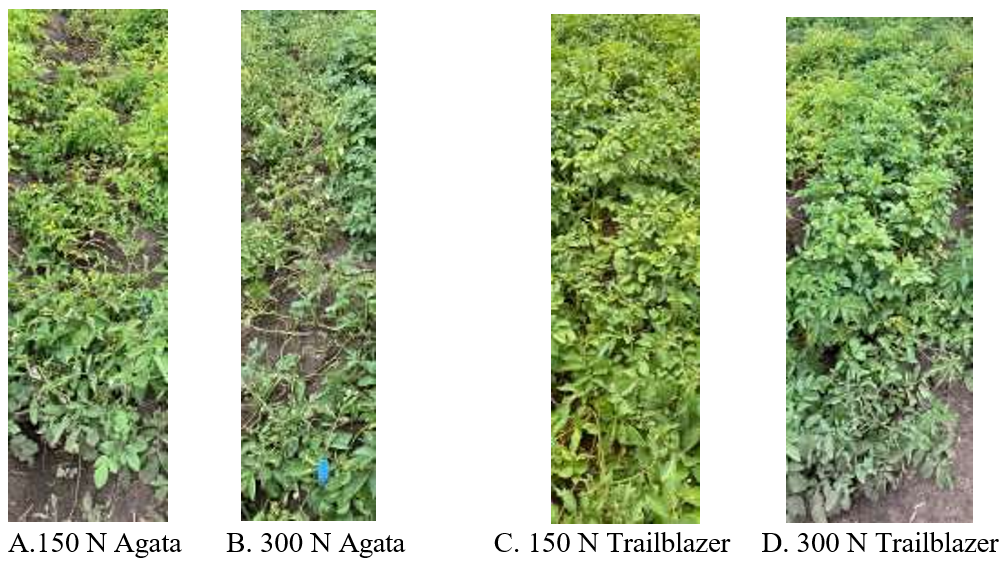 Last week (7/21) at our Antigo Research Station, we applied the second spoon-feeding through the sprayer to our seed potatoes Snowden and Silverton. We had three treatments including 2, 4 and 8 gallons of UAN (32%). We saw leaves burnt under the 4 and 8 gallon treatments (Figures above), but not under the 2 gallon treatment. Overall, even with some burning symptoms, the canopy sizes under the 8 gallon treatment were the largest compared to the two lower doses. We will have the last spoon-feeding this coming week. The nitrate-N level in the groundwater that irrigated our plots is 9.6 ppm.

Current P-Day (Early Blight) and Disease Severity Value (Late Blight) Accumulations. Thanks to Ben Bradford, UW-Madison Entomology; Stephen Jordan, UW-Madison Plant Pathology; and our grower collaborator weather station hosts for supporting this disease management effort again in 2022. A Potato Physiological Day or P-Day value of ≥300 indicates the threshold for early blight risk and triggers preventative fungicide application. A Disease Severity Value or DSV of ≥18 indicates the threshold for late blight risk and triggers preventative fungicide application. Red text in table indicates threshold has been met or surpassed. Weather data used in these calculations will come from weather stations that are placed in potato fields in each of the four locations, once available. Data from an alternative modeling source: https://agweather.cals.wisc.edu/vdifn will be used to supplement as needed. Data are available for each weather station at: https://vegpath.plantpath.wisc.edu/dsv/.

In addition to the potato field weather stations, we have the UW Vegetable Disease and Insect Forecasting Network tool to explore P-Days and DSVs across the state (https://agweather.cals.wisc.edu/vdifn). This tool utilizes NOAA weather data (stations are not situated within potato fields). In using this tool, be sure to enter your model selections and parameters, then hit the blue submit button at the bottom of the parameter boxes.

We have reached thresholds for preventative fungicide treatment in potatoes to manage early blight in all potato plantings in Grand Marsh, Hancock, Plover, and most plantings of potatoes in Antigo areas of Wisconsin. Accumulations of P-Days were moderate to high over the past week. Potatoes should be on a preventative fungicide program with effective disease management selections to limit early blight.

All monitored Wisconsin locations accumulated between 1 and 11 DSVs this past week indicating a relatively low-risk week for promoting late blight in potato plantings in Grand Marsh, Hancock, Plover, and Antigo. However, Antigo plantings have now reached/exceeded the threshold for receiving a preventative application of fungicide for the management of late blight. A fungicide list for potato late blight in Wisconsin was provided in last week’s newsletter and is available here: https://vegpath.plantpath.wisc.edu/2022/07/03/update-10-july-3-2022/

Once thresholds are met for risk of early blight and/or late blight, fungicides are recommended for optimum disease control. Fungicide details can be found in the 2022 Commercial Vegetable Production in Wisconsin Guide, Extension Document A3422, linked here: https://learningstore.extension.wisc.edu/products/commercial-vegetable-production-in-wisconsin

According to usablight.org there have not been recent diagnoses of late blight in tomato or potato crops in the US. For this year, there were just 2 reports entered back in March in southern Florida (US-23 clonal lineage/strain type). However, there were two reports of tomato late blight in Ottawa and Prince Edward Counties in eastern Ontario Canada over the past week.

Cucurbit Downy Mildew: During this past week, downy mildew was confirmed on cucumber in two counties in Michigan (Allegan and Muskegon) and the spores of the pathogen were collected in air sampling traps in numerous other counties. This suggested a large potential dispersal of cucurbit downy mildew pathogen across the state of Michigan in the last week of July. Over the past week other reports came from NY, NJ, PA, MD, and VA. Previously in this growing season, the disease was confirmed in: AL, CT, DE, FL, GA, MA, MD, NC, NH, NJ, NY, OH, PA, SC, and VA. No findings of cucurbit downy mildew in our Wisconsin-based sentinel plots in Dane County.

As a reminder, the pathogen is now known to have two ‘strains’ for clade types. The type (Clade 2) which infects cucumber, can also infect melon. Due to fungicide resistance within the downy mildew pathogen population, especially in Clade 2, selection of fungicides is important. Management of cucurbit downy mildew requires preventative fungicide applications as commercial cultivars are generally susceptible to current strains (Clades) of the pathogen. Management information can be sourced here: https://vegpath.plantpath.wisc.edu/2022/07/03/update-10-july-3-2022/

A full article with pictures can be found here: https://www.canr.msu.edu/news/downy-mildew-detected-on-cukes-in-muskegon-and-allegan

Cucurbit Powdery Mildew: Cucurbits have been showing signs of powdery mildew in central Wisconsin over the past week. This disease is typically caused by the fungal pathogen Podosphaera xanthii and we see it appear on most susceptible cucurbits first in mid to late July of most years. While some cucurbits can tolerate powdery mildew infection, if the disease onsets early and on a highly susceptible variety, control may be necessary. There are several fungicides with effective control of powdery mildew (list provided below from the A3422 Commercial production guide for vegetables in Wisconsin). However, cucurbit powdery mildew pathogen populations in Wisconsin have resistance to the strobilurin fungicides which include azoxystrobin, pyraclostrobin, and trifloxystrobin. In our past field trials, Quintec (quinoxyfen) was most effective in alternation and tank-mixed with chlorothalonil. For multi-pick cucurbits, it’s important to have a look at the allowable days to harvest. The images below show typical powdery mildew signs (talcum-like white spore production on foliage) and the disease cycle of powdery mildew on cucurbits. 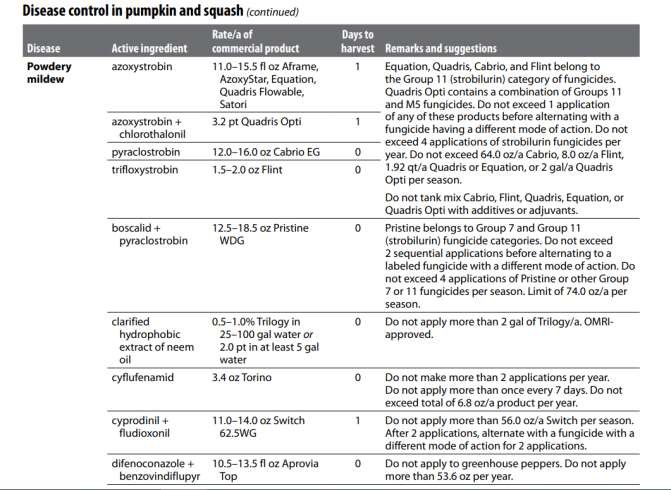 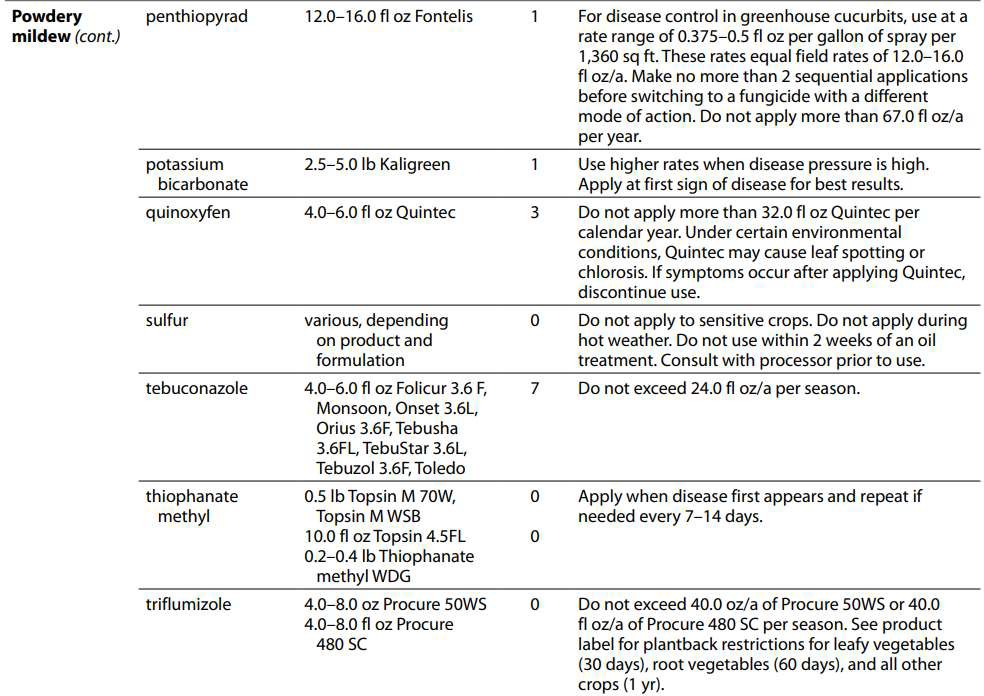