It has been a hot week without any rain, growers have to run irrigation constantly to keep soil moist and avoid drought stress. Some folks have seen wilting along edges of the fields that weren’t getting irrigated well enough.  Looking at the weather forecasting, we should get cooler temperatures in the next 10 days, which should help keep tuber bulking potential high. 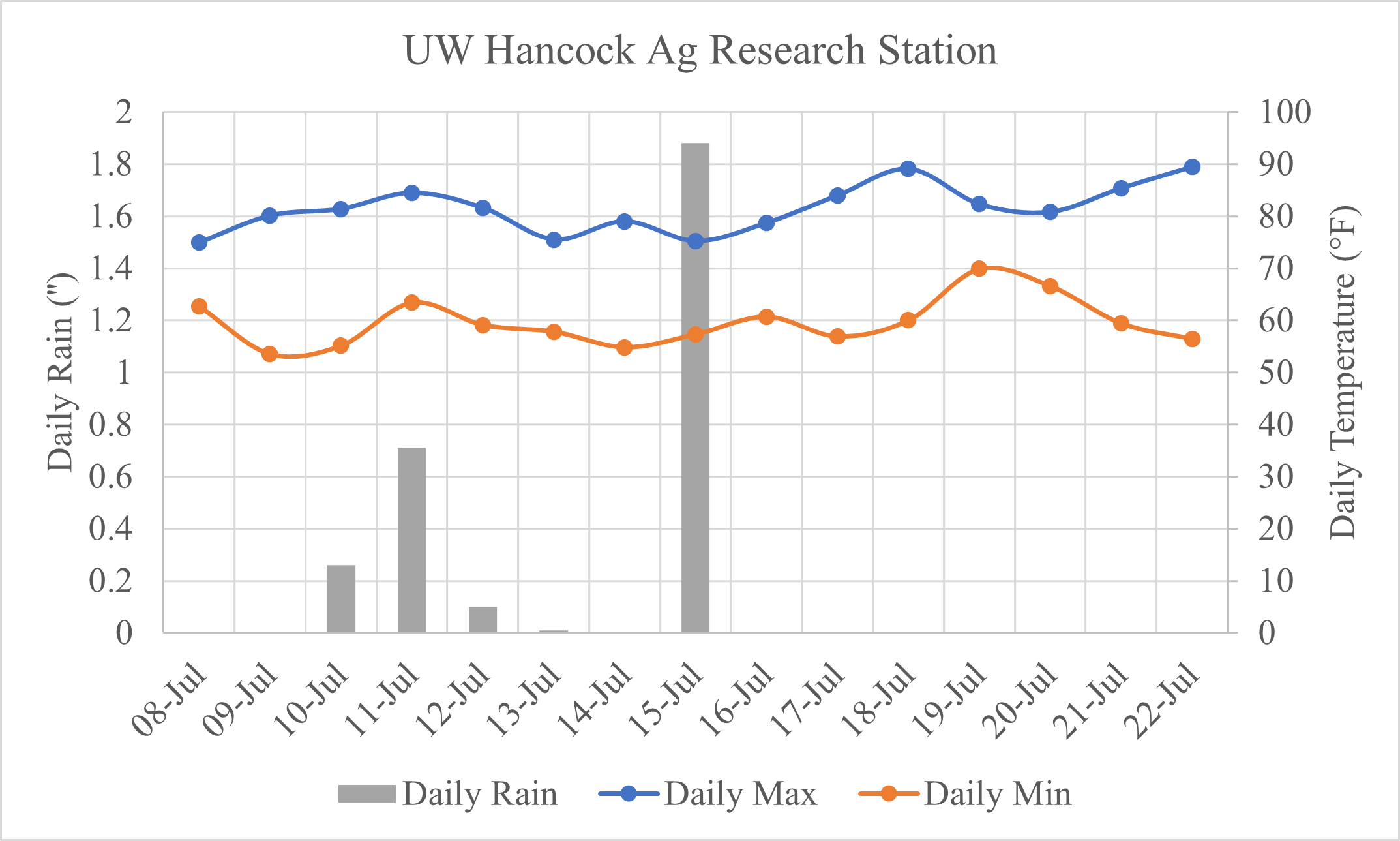 Growers have reported average yield based on test digs. Only a couple of reds demonstrated good yield, yellows seem to be about average, russets and whites so far are progressing on schedule but no barn burner varieties are found yet. Test digs of russets in the past two days showed that yield ranged from 200 – 300 cwt/ acre. Scab issues have been observed on some reds and yellows due to dry weather.

I just got back from the Potato Association of America Annual meeting. I attended a nice talk made by Ben Eborn from North American Potato Market News. Based on Ben’s reports, total operating costs per acre for Idaho Russet Burbank potatoes increased by 18.7% in 2020-2021, and by 23.6% in 2021-2022; total costs (including ownership costs and operating costs) per acre went up by 14.8% in 2020-2021, and by 19.0% in 2021-2022. These increases are due to inflation that caused skyrocketed costs of fertilizers/chemicals/fuel, the severe drought situation in Idaho in 2021 that led to substantial shortage of potatoes, and supply chain issues. With all those factors together with strong grain prices, Idaho growers have cut their planting acreage by 25,000 acres this season. In Wisconsin, planting acreage went down by about 1,000 acres compared to last year. Wisconsin folks have said that we will have plenty of potatoes in the country if we get near trend line yields. Hopefully weather stays good for the rest of the season.

Below are the groundwater testing results from wells at our UW Hancock Ag Research Station. Again the K well that irrigates a lot of our potato and vegetable trials showed the highest nitrate-N level.

These numbers matched with what we got from the water quality test strips that I previously mentioned in my articles.

This past Tuesday we flew a commercial Caribou field that has a treatment strip with no N applied at tuber initiation. All other N applications at other growth stages are the same as the standard program. We can certainly see the yellower canopy color from this zero N strip. Stayed tuned for yield and quality data from this treatment.

Potato virus Y (PVY) – (https://vegento.russell.wisc.edu/pests/plant-pathogens/).  The application of foliar insecticides in the growing season to potato has almost no effect on preventing PVY inoculation of plants by non-potato colonizing aphid species that are migrating into and transmitting the virus through susceptible potato. At-plant, systemic insecticides can, however, help to reduce populations of potato-colonizing species, and this can provide some relief from virus spread in the current season.

Foliar applications of paraffinic oils have previously been shown to modify the feeding behaviors of non-potato colonizing, migrating aphids alighting onto the potato canopy as they move through the local landscape. Specifically, these investigations have revealed that aphids are discouraged from probing on leaves that possess residues of compounds containing (> 95%) of paraffinic oils, resulting in limited inoculation attempts. A portion of our applied research program has investigated the value of these paraffinic oils in limiting non-persistent PVY transmission, by (1) determining the periods of greatest risk for aphid movement and transmission, coupled with (2) experiments to evaluate the timing and coverage of these different oil-containing compounds. 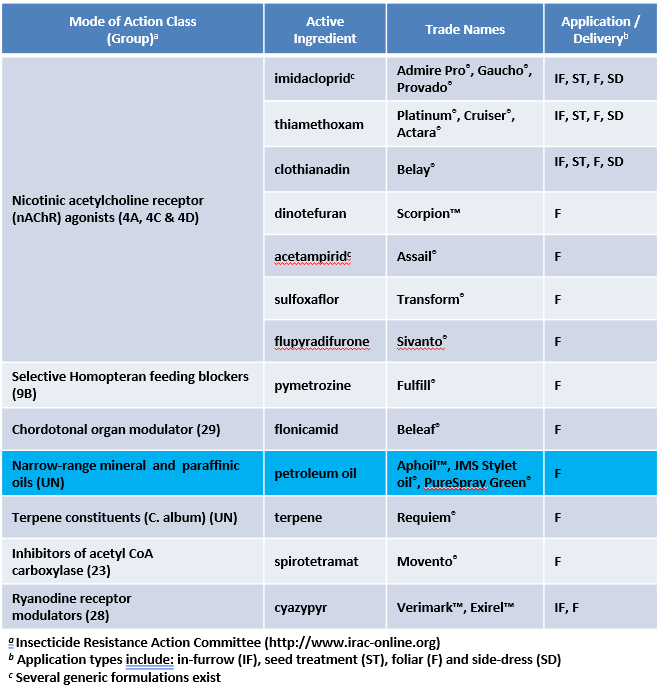 Of principal interest to potato seed growers in Wisconsin is the prevention of PVY in seed potato lots. Reductions in PVY transmission can be prevented, in part, by the timely application of paraffinic oils, which discourage aphids from probing leaf tissues in search of their preferred host and inadvertently transmitting the virus. Using the Upper Midwest, Aphid Suction Trap Network we have modeled the flight patterns for a number of different aphid species captured by these traps. These species-specific, predictive models have been aligned to cumulative degree-days (base 39o F) to account for site-to-site and annual climatic variations. We have taken these species-specific models and incorporated published PVY transmission efficiency values (Table 1) to compute risk-adjusted counts for each species. These counts are then summed for individual aphid species, or collections of species presumed to account for the majority of PVY transmission, into a single model illustrating the aggregate risk values.

When taken together, these aggregate values can be modeled to better define a predicted ‘risk window’ in Wisconsin for the transmission of PVY (Fig. 1). The model output is a curve where the primary rising segment indicates the start, midpoint, and end of the predicted ‘risk interval’ (aka. flight event for a combination of important vector species) or the risk window for the aggregate PVY risk model. This model incorporates all potential PVY aphid vectors and so is more useful than flight models generated for any one species. Based on the model illustrated, the PVY risk window begins around 1967 degree-days (base 39°F), peaks around 2473 degree-days, and ends around 3228 degree-days.

Many seed growing areas of the state are now entering the period with the highest overall risk for PVY transmission. The inset to the right illustrates that 1969 degree days have just been generated in the areas immediately surrounding the Antigo Flats. For seed producers, the timeframe for PVY transmission is reaching its beginning and will continue over the next 30-45 days.

A few quick guidelines when attempting to manage this virus in seed:

Current P-Day (Early Blight) and Disease Severity Value (Late Blight) Accumulations.  Thanks to Ben Bradford, UW-Madison Entomology; Stephen Jordan, UW-Madison Plant Pathology; and our grower collaborator weather station hosts for supporting this disease management effort again in 2022.  A Potato Physiological Day or P-Day value of ≥300 indicates the threshold for early blight risk and triggers preventative fungicide application.  A Disease Severity Value or DSV of ≥18 indicates the threshold for late blight risk and triggers preventative fungicide application.  Red text in table indicates threshold has been met or surpassed.  Weather data used in these calculations will come from weather stations that are placed in potato fields in each of the four locations, once available.  Data from an alternative modeling source: https://agweather.cals.wisc.edu/vdifn will be used to supplement as needed.  Data are available for each weather station at:  https://vegpath.plantpath.wisc.edu/dsv/.

We have reached thresholds for preventative fungicide treatment in potatoes to manage early blight in all potato plantings in Grand Marsh, Hancock, Plover, and most plantings of potatoes in Antigo areas of Wisconsin.  Accumulations of P-Days were moderate to high over the past week. Potatoes should be on a preventative fungicide program with effective disease management selections to limit early blight.

All monitored Wisconsin locations accumulated between 2 and 9 DSVs this past week indicating a relatively low-risk week for promoting late blight in potato plantings in Grand Marsh, Hancock, Plover, and Antigo.  However, Antigo plantings have now reached/exceeded the threshold for receiving a preventative application of fungicide for the management of late blight.  A fungicide list for potato late blight in Wisconsin was provided in last week’s newsletter and is available here:  https://vegpath.plantpath.wisc.edu/2022/07/03/update-10-july-3-2022/

Once thresholds are met for risk of early blight and/or late blight, fungicides are recommended for optimum disease control.  Fungicide details can be found in the 2022 Commercial Vegetable Production in Wisconsin Guide, Extension Document A3422, linked here: https://learningstore.extension.wisc.edu/products/commercial-vegetable-production-in-wisconsin

According to usablight.org there have not been recent diagnoses of late blight in tomato or potato crops in the US.  For this year, there were just 2 reports entered back in March in southern Florida (US-23 clonal lineage/strain type).

There are no confirmations of downy mildew on cucurbits in our region at this time, nor risk of spread of the pathogen to Wisconsin.

As a reminder, the pathogen is now known to have two ‘strains’ for clade types.  The type (Clade 2) which infects cucumber, can als infect melon.  Due to fungicide resistance within the downy mildew pathogen population, especially in Clade 2, selection of fungicides is important.  Management of cucurbit downy mildew requires preventative fungicide applications as commercial cultivars are generally susceptible to current strains (Clades) of the pathogen.  Management information can be sourced here:  https://vegpath.plantpath.wisc.edu/2022/07/03/update-10-july-3-2022/