Late blight is a disease that typically causes severe symptoms on flowering plants of the family Solanaceae. The pathogen that causes late blight, Phytophthora infestans, infects a variety of Solanum spp., including eggplant, pepper, nightshades, and petunia. However, it is most infamously known for its destruction of potato, S. tuberosum, and tomato, S. lycopersicum.

Symptoms of late blight can occur on all parts of a potato plant. Leaf symptoms include circular, necrotic or brown lesions surrounded by collapsed pale or chlorotic (pale green to yellow) tissue. Enlarged, water- soaked or wet and oily-appearing leaf lesions often give rise to sporulation, identifiable by white or gray fuzzy growth. Dark green, brown, or black water-soaked lesions on the stem may also contain sporulation. Symptomatic tubers typically have sunken and firm brown lesions that may extend several centimeters into the tuber. The variability in lesion appearance is often the result of differences in moisture.

Phytophthora infestans is the oomycete, or water mold pathogen, responsible for potato late blight. Water molds are known for their multiple “spore” types, each of which plays a unique role in making disease. The pathogen spreads by movement of its sporangia (the primary “spore” type for longer-distance movement) by air or by splashing within a field or garden.

When moisture is high and there is pooling water on soil surfaces or wetness on leaves, the sporangia can give rise to zoospores, the “spore” type responsible for shorter-distance movement. Zoospores can swim for approximately 2-10 hours and create new infections within fields and gardens.

In Wisconsin and throughout the continental United States, the P. infestans pathogen fortunately does not make the sexual, or soilborne, spore known as the oospore. This does happen in other countries and creates a long-term challenge to vegetable production.

Moist and moderate temperatures (90-100% humidity and 54-75°F) promote the production of sporangia (primary “spores”). Sporangia typically infect at 64-75°F, whereas zoospores are produced and can be infective at 46-64°F. Wisconsin residents can refer to the disease prediction and weather models available at Vegetable Disease and Insect Forecasting Network (VDIFN) website.

The disease cycle of P. infestans is generally asexual here in the United States. The sporangia land on leaf, stem, and other plant tissues and either infect directly or produce zoospores, which then infect the plant under cooler, wetter conditions. Under optimal disease-promoting conditions, infection can occur in as little as 2 hours. After 4-5 days of sufficient moisture and moderate temperatures, site of infection, creating white, for further dispersal. Sporulation can take place at the fuzzy growth and new sporangia for further dispersal.

Rapid repetition of the asexual cycle causes large-scale late blight epidemics. Because the oospore of this pathogen is not present in the United States, overwintering of the pathogen occurs largely by persistence of infected potato tubers or other plant parts (tomato fruits or stems). The pathogen cannot survive on its own in the environment without survival on some kind of living plant host tissue.

A disease severity predictive model based on air temperature and relative humidity is available at the Vegetable Disease and Insect Forecasting Network (VDIFN) website. From the Disease tab, select the “Late Blight” model. This model uses Disease Severity Values (DSVs) computed from the last week of gridded NOAA weather data to calculate the risk of Phytophthora infestans development, which is displayed as a colored map overlay. The start point should be adjusted to crop emergence or the last fungicide spray, whichever is more recent. The model takes into account the total DSVs accumulated during a season, as well as the amount accumulated since the start date. Click any grid point in VDIFN to get more detailed weather and disease progression information for that location.

Late blight management strategies aim to limit the presence of initial inoculum (the first wave of sporangia or spores) and prevent the development of secondary inoculum (subsequent waves of spores produced on plants). There are many practices that can help control late blight:

Many fungicides are available for commercial conventional and organic production. For Wisconsin-specific fungicide information, click here for a list of fungicides registered for commercial use, or refer to Commercial Vegetable Production in Wisconsin (A3422), a guide available through the UW Extension Learning Store website. Or, for home garden fungicide recommendations, see Home Vegetable Garden Fungicides (XHT1211), a fact sheet available through the UW Plant Disease Diagnostic Clinic website. 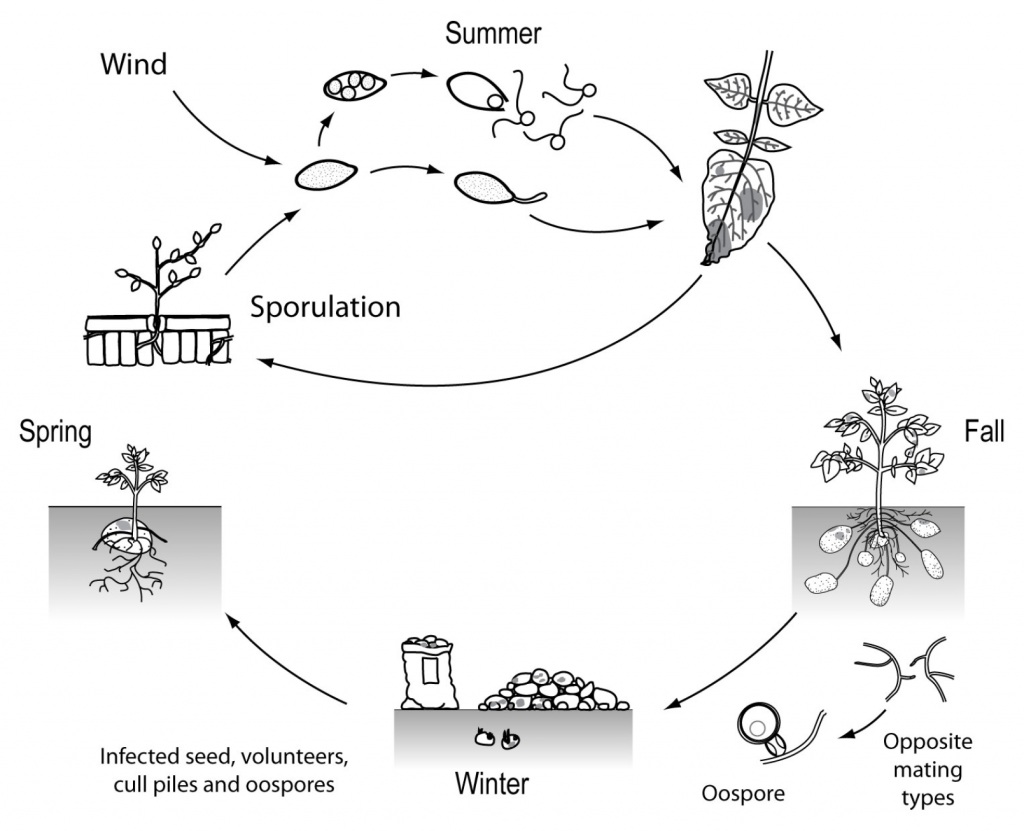