Onion thrips – (https://vegento.russell.wisc.edu/pests/onion-thrips/). Onion thrips (Thrips tabaci) are an important annual pest of onion. They may attack nearly all garden crops, but serious damage is generally limited to onions, cabbage, cucumber, and tomatoes (hoop/hot house). Adult onion thrips are about 1/12” long, thin, and pale yellow to brown in color. Their wings have no veins and are fringed with long hairs. Immature thrips (e.g. nymphs) somewhat resemble adults except they are smaller and are often yellow in color.

Mass immigration of adult thrips to onion fields can occur any time throughout the summer but is likely coincident with harvest of infested legume and grain fields that are nearby. Second cutting alfalfa is also a significant risk factor for the movement of adult onion thrips. Throughout portions of Wisconsin, ‘abnormally dry’ conditions are developing in portions of the state, and these conditions also favor the development and survival of onion thrips populations. Forecast rain in the coming week across southern Wisconsin may slow this development. 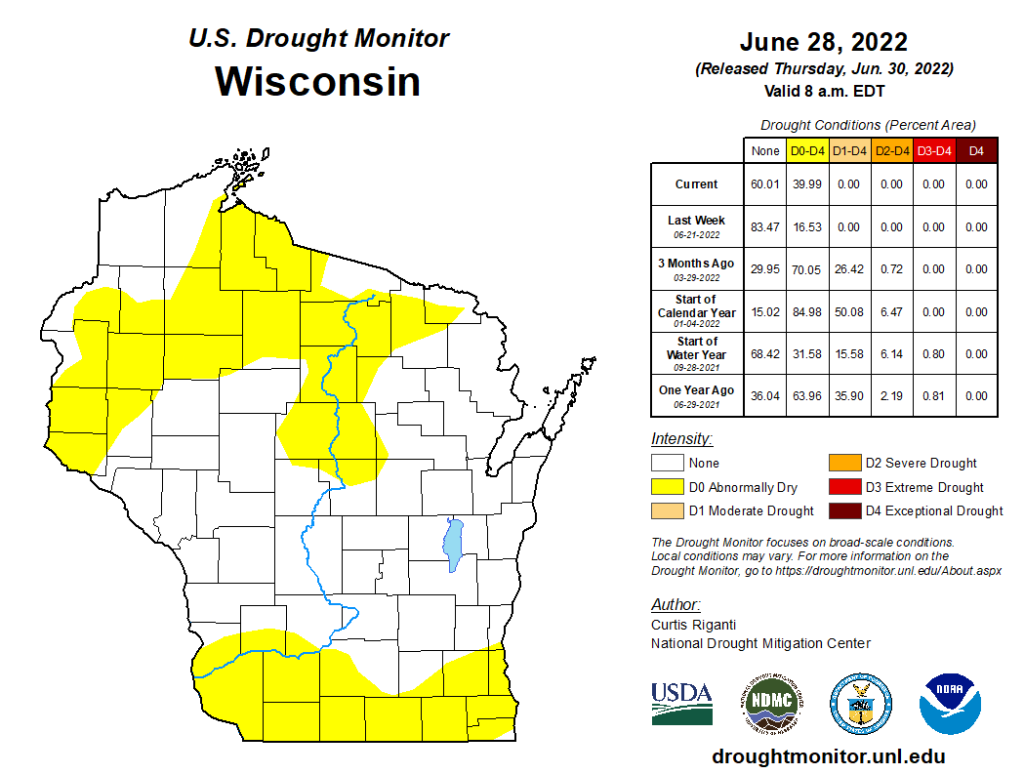 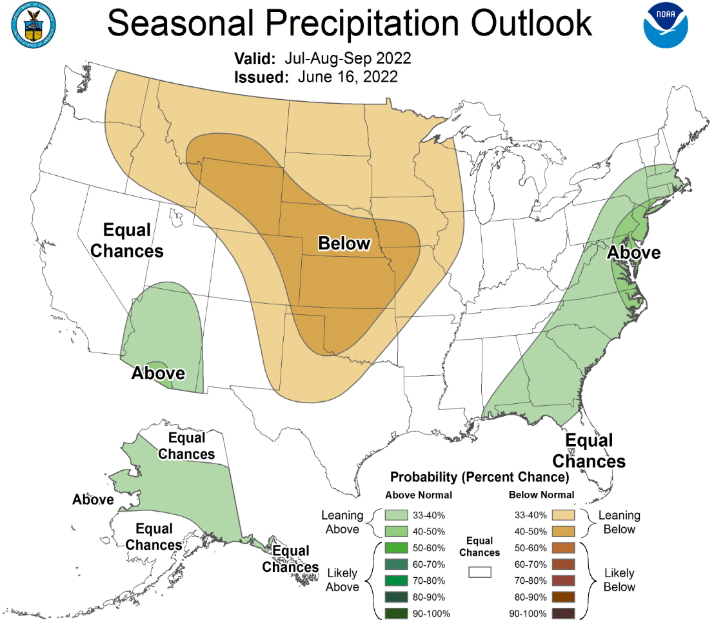 Continue scouting susceptible crops, however, to determine whether established thresholds have been met or exceeded. Management thresholds are most often based upon numbers of immature (nymphs) per leaf, and are not based upon levels of visual damage. Recall that feeding damage causes whitish blotches and dry, yellow areas on leaves, decreased pollen set, and, under heavy infestations, brown leaf tips and distorted or undersized bulbs. Both adults and larvae can cause silvery streaking on leaves, which becomes dry and yellow.

Since thrips prefer tight spaces, cabbage varieties with extremely dense heads are most susceptible to damage. Thrips are often found several layers deep within developing cabbage heads. Heavy thrips buildup may cause the cabbage head to become distorted. Red onions are particularly susceptible, while Spanish onions tend to be somewhat resistant. Insecticide active ingredients that are part of management guidelines for onion thrips include spirotetramat (Movento), abamectin (Agri-Mek), spinetoram (Radiant), cyantraniliprole (Exirel, Minecto Pro), methomyl (Lannate) and lambda-cyhalothrin (Warrior). Many of these active ingredients are also available as generics and pre-mixes, so be cautious when developing your annual program of control and do not use similar modes of action (MoA) over successive generations. It is often recommended to use the same active ingredient as a series of two, successive applications (spaced 7-10 days apart) followed by a switch to a new MoA.

Squash bugs – (https://vegento.russell.wisc.edu/pests/squash-bug/).  Squash bugs are an emerging problem at this point in the summer in parts of southern and central Wisconsin. In recent years, these insects have become more prevalent, causing damage to vine crops in commercial fields and home gardens alike. The key to management is early detection. Squash bugs feed on all vine crops, but pumpkins and squash are the preferred hosts with gourds and melons favored next.

Nymphs and adults feed on plant juices and release toxins into leaves. Feeding causes wilting, and leaves become dry and brown or black along the edges. This wilting may appear like bacterial wilt, but bacterial wilt is spread by the cucumber beetle. Early symptoms of infestation include yellow spotting on the leaves. Later in the season, adults will also feed on fruit, which can cease development and begin to rot. Young plants are more susceptible to severe damage.

Adults are about ½ -3/4-inch long, brownish-black, flat, shield-shaped bugs. They are sometimes mistaken for stink bugs. Adults congregate and emit a strong odor when crushed. Immature squash bugs initially have red heads and legs with whitish-green bodies, but later have black heads and legs with gray bodies. Eggs are 1/16-inch, reddish orange to brown-colored and are laid in clusters on the undersides of leaves along the center vein

Unmated adults overwinter in Wisconsin in protected areas. Eggs are laid in late June and early July when cucurbit vines begin to develop. Eggs hatch in about 10 days. The nymphal stage lasts 4-6 weeks. Nymphs undergo 5 molts before reaching maturity. Adults appear in late July and early August. There is one generation per year. The female lays eggs over an extended period, and all life stages may appear at once on the plant.

Destroy crop residues in the fall to reduce the number of overwintering adults. Crop rotation will also reduce the incidence of infestation. Trellised plants are less susceptible to squash bug infestations. Young nymphs are the most susceptible to control practices, while adults are more difficult to control. In smaller plantings, adults can be congregated by placing boards on the ground near the plants as a hiding place. The squash bugs will aggregate at night under the boards, which can then be destroyed each morning.

Striped cucumber beetle – (https://vegento.russell.wisc.edu/pests/cucumber-beetles/).  Striped and spotted cucumber beetles continue to cause significant damage in vine crops, but the striped beetle is more prevalent in Wisconsin. Feeding from larvae and adults causes direct damage to roots, leaves, flowers, and fruits. Adults can also vector fusarium wilt and the bacteria, Erwinia tracheiphila. Cucumbers and melons are particularly susceptible to bacterial wilt, and damage from this can be severe.

Only the striped cucumber beetle overwinters in Wisconsin. Significant numbers emerged in mid- to late May and began infesting cucurbits. The beetles are attracted to the chemical cucurbitactin produced by the plants. The small white larvae feed on plant roots for 2-3 weeks before pupating in the soil. Spotted beetles migrate to northern locations in early to mid-July. This late arrival generally seldom makes them a serious problem. There is one generation of striped and spotted beetles per year.

Several chemical insecticides are available when beetles exceed thresholds. However, chemical control will be limited if beetle populations are already high.  Systemic neonicotinoid insecticides should be used with caution. Contact insecticides (including botanicals) should be applied to seedlings before transplanting and continued on a regular basis to keep numbers low. Cucumber leaves are sensitive and can be burned by chemical sprays. Spraying in the afternoon or evening is preferable to avoid killing beneficial insects and pollinators.

With no extreme weather conditions, so far the plants have been doing well. Growers in the Central Sands have done a couple of fertigations to feed nutrients to the rapidly growing plants, which have achieved 100% canopy closure and flowering. Below I am showing some aerial images displaying the fast expansion of plant canopies within one week. 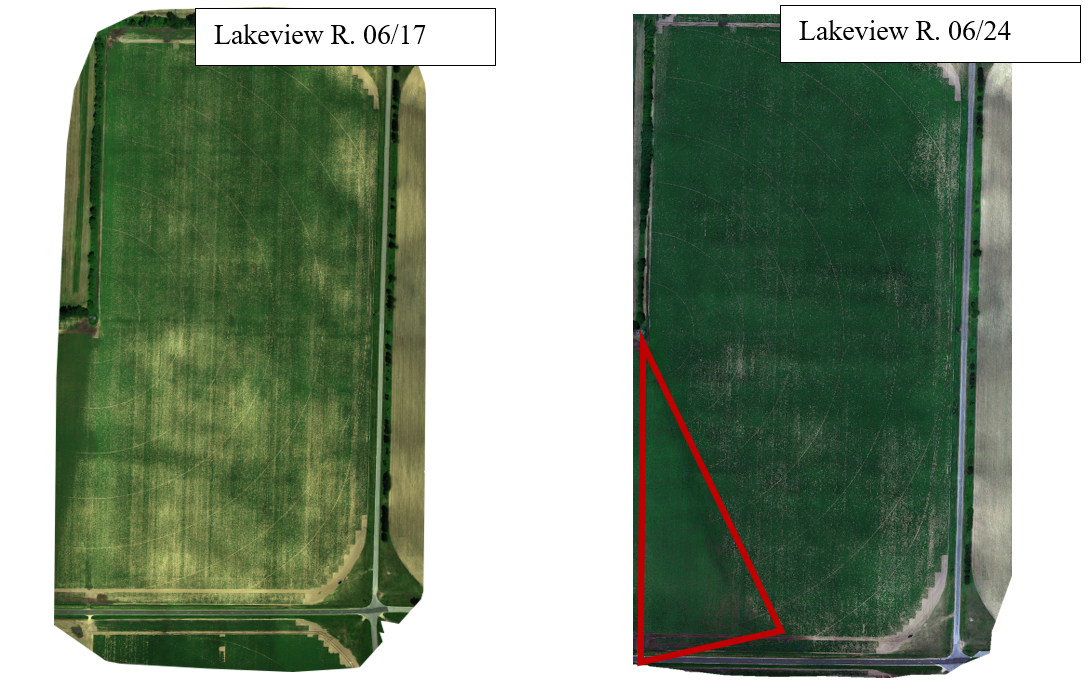 It needs to be pointed out that for the Lakeview Russet image collected on June 24th, there is a blurry patch at the lower left corner (highlighted by a red triangle in figure above right). This was caused by drifted water during an irrigation event. 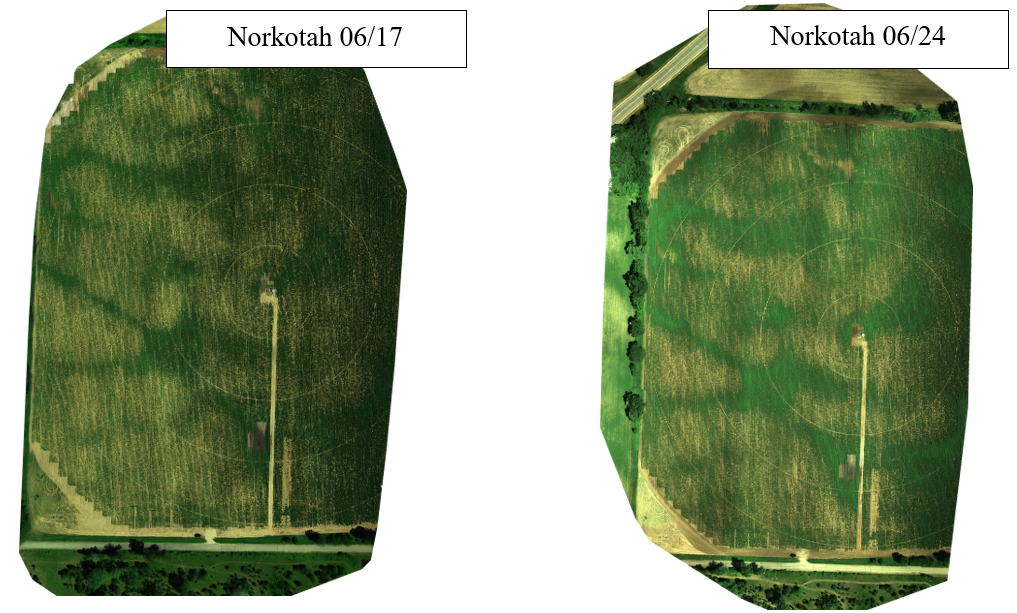 This week I used the nitrate test strips that I showed in my last week’s newsletter to rapidly test the general nitrate-N level in the wells that irrigate our research plots at Hancock. It is very obvious that nitrate-N in the K well is higher than 20 ppm, and that in the C west well is lower than 10 ppm. Again I would recommend that our growers try those test strips on their fields to know their general nitrate-N level in the water.

Last, something fun to share. This year I worked with an undergraduate (Ms. Melina Nguyen) to participate in the Flow project at UW-Madison. This project paired undergraduate student artists with water professionals from across the state of Wisconsin to create art inspired by water. From the breakdown of pesticides in Wisconsin’s lakes to a book educating children about the smallmouth bass, this year’s Flow Project is featured by the amazing work being done on behalf of the waterways in and around Wisconsin. Below is the artwork that Melina created about my research on water and vegetable crops.

Current P-Day (Early Blight) and Disease Severity Value (Late Blight) Accumulations.  Thanks to Ben Bradford, UW-Madison Entomology; Stephen Jordan, UW-Madison Plant Pathology; and our grower collaborator weather station hosts for supporting this disease management effort again in 2022.  A Potato Physiological Day or P-Day value of ≥300 indicates the threshold for early blight risk and triggers preventative fungicide application.  A Disease Severity Value or DSV of ≥18 indicates the threshold for late blight risk and triggers preventative fungicide application.  Red text in table indicates threshold has been met or surpassed.  TBD indicates that data are To Be Determined as time progresses.  Weather data used in these calculations will come from weather stations that are placed in potato fields in each of the four locations, once available.  Data from an alternative modeling source: https://agweather.cals.wisc.edu/vdifn will be used to supplement as needed for missing data points.  Data are available in graphical and raw formats for each weather station at:  https://vegpath.plantpath.wisc.edu/dsv/.

We have reached thresholds for preventative fungicide treatment in potatoes to manage early blight in Grand Marsh (early and mid-plantings, with late plantings likely to reach threshold within the next day).  Hancock and Plover locations’ early and mid-plantings are also exceeding threshold and should be treated to limit early blight.  No threshold for early blight management has been met in the Antigo area. In scouting for early blight in lower potato plant canopies earlier this past week, I couldn’t find lesions.  The canopies in our potato plantings at UW Hancock ARS have been quite dry due to unusually higher winds in the region.  I’ve been surprised to see this drying condition this year as it substantially influences moisture and associated disease risk in plant canopies.  While P-Days take into account heat and crop status, DSVs also consider moisture.  This is why our DSVs have been quite low this year despite where we are on the calendar and in crop development.

Once thresholds are met for risk of early blight and/or late blight, fungicides are recommended for optimum disease control.  Fungicide details can be found in the 2022 Commercial Vegetable Production in Wisconsin Guide, Extension Document A3422, linked here: https://learningstore.extension.wisc.edu/products/commercial-vegetable-production-in-wisconsin. I have also created a summary table of the available fungicide options for late blight prevention in Wisconsin here.

According to usablight.org there have not been recent diagnoses of late blight in tomato or potato crops in the US.  For this year, there were just 2 reports entered back in March in southern Florida (US-23 clonal lineage/strain type).

Dr. Mary Hausbeck’s Plant Pathology Laboratory at Michigan State University routinely reports spore trapping information for multiple locations in Michigan.  In mid-June there were a few days with indication of presence of Pseudoperonospora cubensis or cucurbit downy mildew pathogen spores, but, to date, no cases of downy mildew in cucurbit plantings in the state of Michigan.

As a reminder, the pathogen is now known to have two ‘strains’ for clade types.  The type (Clade 2) which infects cucumber, can also infect melon.  Due to fungicide resistance within the downy mildew pathogen population, especially in Clade 2, selection of fungicides is important. 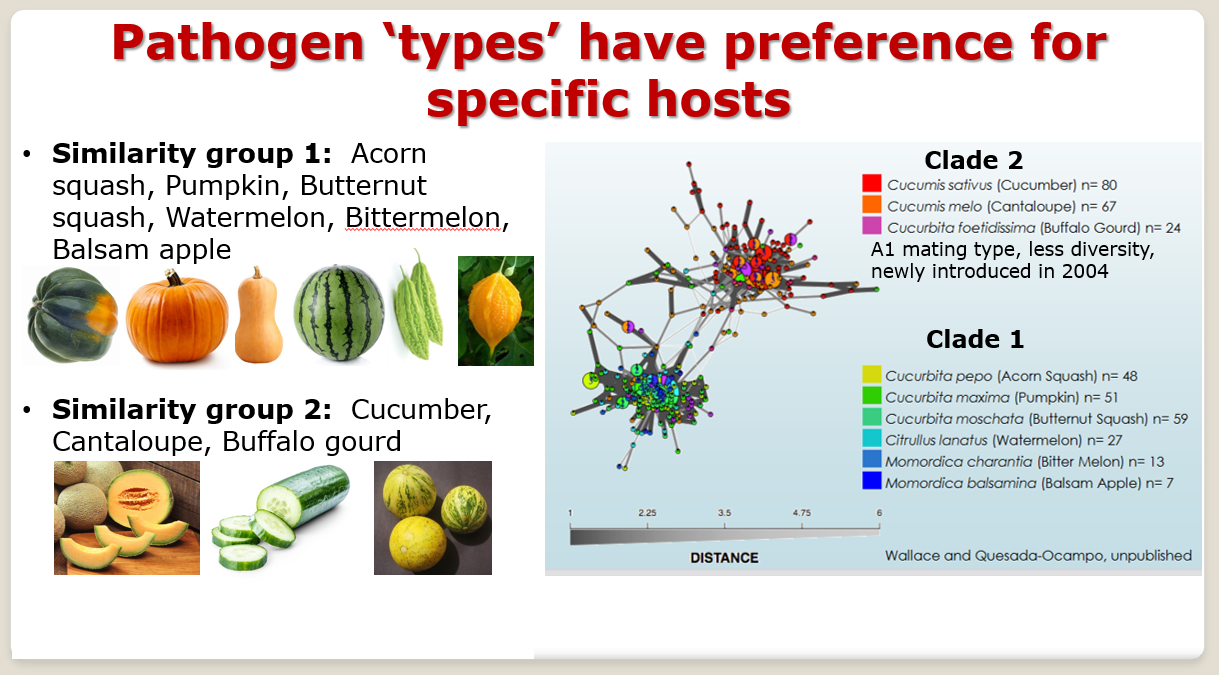 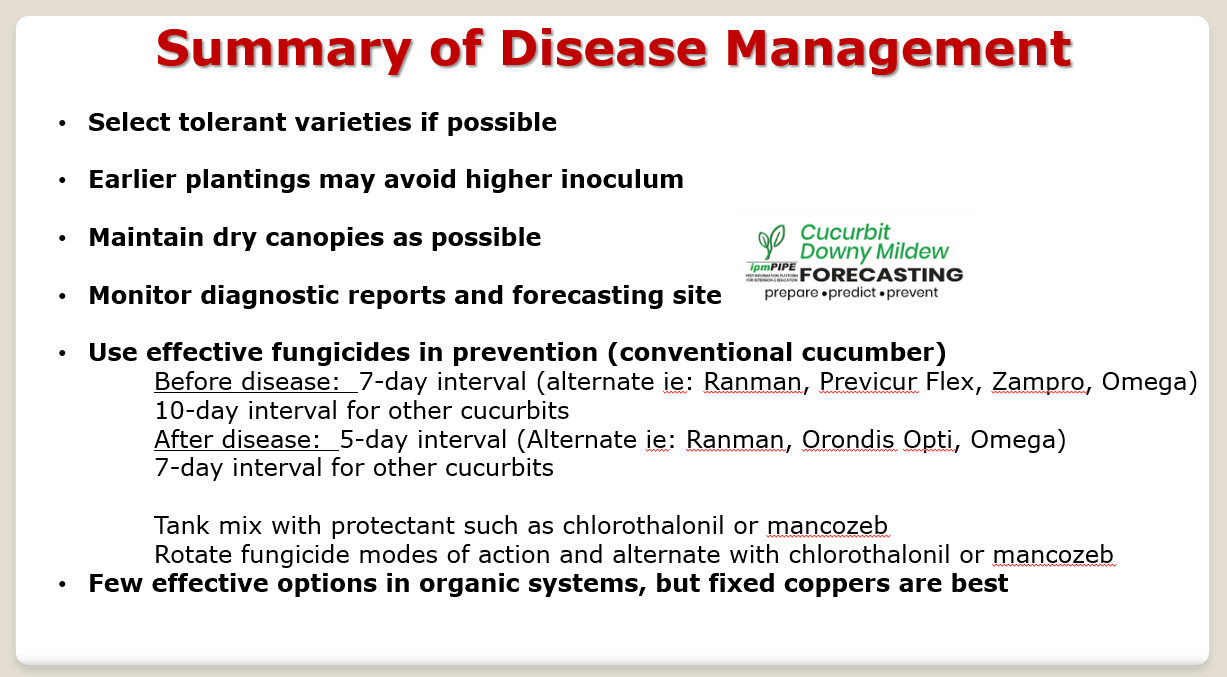 Because of the unique attributes of the new clades, I have summarized unique preventative fungicide programs based on crop groupings.  These recommendations are summarizations of work done by many outstanding research and extension professionals including:  Drs. Mary Hausbeck at Michigan State Univ., Sally Miller at Ohio State Univ., and Lina Quesada Ocampo at North Carolina State Univ. 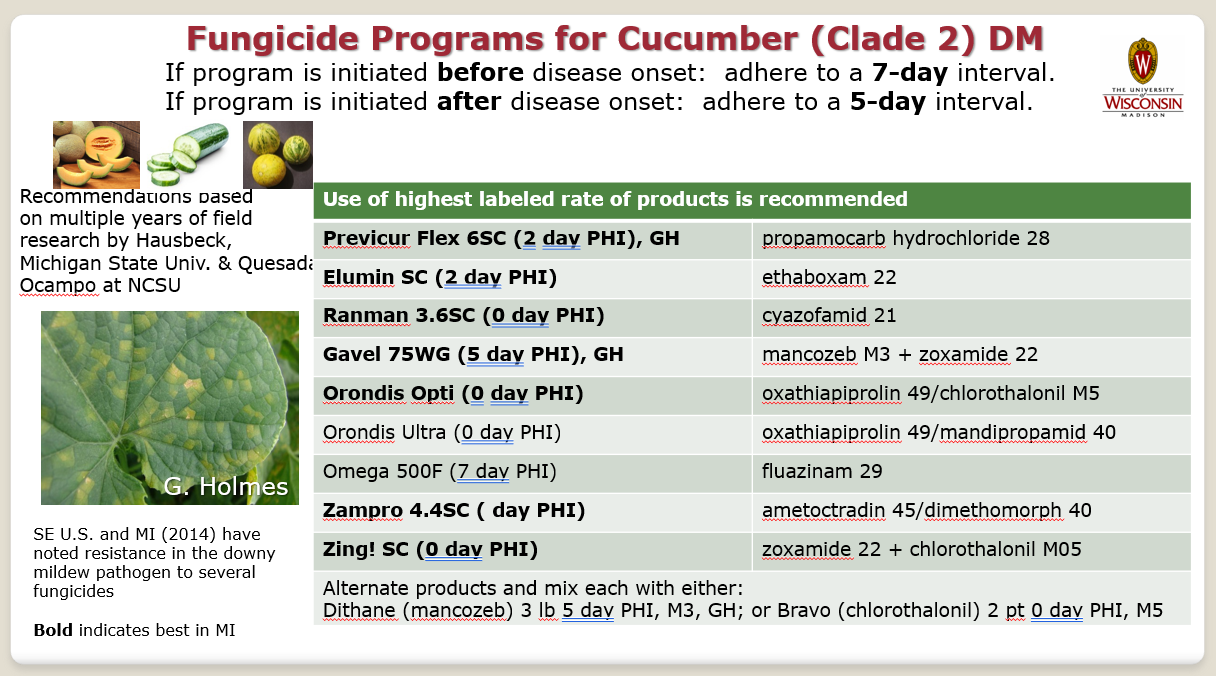