First, a quick update on our remote sensing research. Last week and this week we collected aerial images on two commercial fields again. The picture below (Figure 1) was taken on a Lakeview Russet field last week, and it shows that there are variations in plant growth and canopy size, possibly caused by elevation variability within the field.

This week at the Hancock Ag Research Station, most plants have reached > 85% canopy closure. I have seen Colomba tubers about the size of a quarter (Figure 2), and more than 50% of the 18 varieties tested in our trial have started blooming (Figure 3). We saw bulking stolon tips in every variety.

Last week there was a sand storm in Central Wisconsin with wind speed close to 40 mph. I noticed some of our Russet Burbank plants falling over to one side of the hill (Figure 4, top). However, those plants grew bigger this week and the expanded canopies started to cover the bare soil that was exposed after the wind (Figure 4, bottom). Overall most of the potato plants were able to recover from the strong wind.

However, the small seedlings of more recently planted crops such as carrots, snap beans, or kidney beans that just emerged or were in the V0-V1 stages had a higher chance of being flailed about, torn or left with small holes on the tender leaves. Those wind damages might lead to yield and quality reduction at harvest.

This past week I ordered some water quality test strips for nitrate and nitrite. These strips are easy to use (no endorsement). All you need to do is to dip it into water or pass under gentle water stream for 1 second, remove, hold it for 30 seconds and compare it to the color chart for estimating the NO3-N and NO2-N ranges. I used the strip to test the drinking water from our water fountain, and got the results that nitrate-N was 2-5 ppm, and nitrite-N was 0 ppm, as shown in the figure below.

This summer I plan to visit some farms and use this test kit to rapidly estimate nitrate-N and nitrite-N ranges in the irrigation water. I also plan to send those water samples to our water analysis lab to know the exact numbers, which can be used to compare with the estimated ranges. It is recommended that our growers can try those strips for knowing their groundwater nitrate-N range in a fast way.

For seed potato growth, this week our plants at the Antigo Ag Research Station were about 6 – 12’’ tall (Figure 6, top), and some plants started to hook at the tip of the stolons (Figure 6, bottom).

We are conducting a “spoon-feeding” trial in Antigo where we have different N treatments: 0 N, 180 N applied at planting and hilling, 180 N applied at planting, hilling, and split through three times of spoon feeding during tuber bulking. The spoon feeding treatments will be done by the sprayer and include 2, 4 and 8 gallons of 32% UAN each time. The objective of this study is to evaluate if there are benefits to spoon feed nitrogen to seed potato plants. “Benefits” here could mean both economic (higher yield) and/or environmental (less leaching). We will collect aerial images to monitor plant growth and any potential “burning” issues under different spoon feeding treatments. 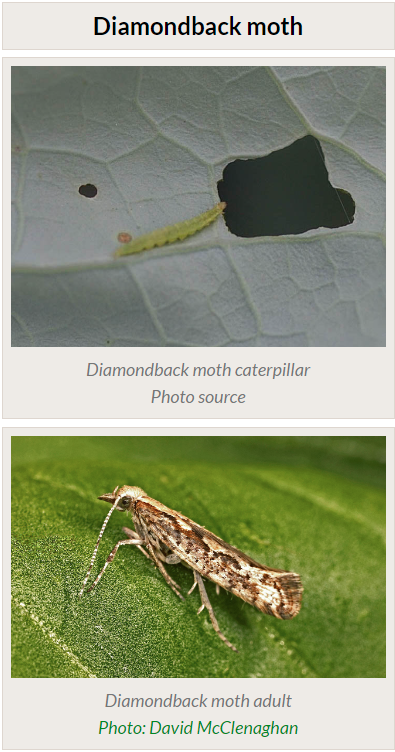 Caterpillar Pests in Cole Crops – (https://vegento.russell.wisc.edu/pests/caterpillar-pests-of-cole-crops/). Imported cabbageworms (also known as cabbage whites or small whites), Cabbage loopers and Diamondback moths are the three most significant caterpillar pests of Wisconsin cole crops, with the imported cabbage worm and diamondback moth being the most significant. Diamondback moths are worldwide pests of cabbage and leafy greens and have developed resistance to numerous insecticides and several products containing Bacillus thuringiensis (Bt). Important to mention here, the cabbage looper has a very broad host range and attacks beets, celery, lettuce, peas, potatoes, spinach and tomatoes, in addition to cole crops. Damage caused by these pests can result in significant economic losses in Wisconsin if left uncontrolled but can be managed through conservation biological control which allows natural enemies to assist with mid- to late season pest management.

Because of their ability to generate resistance to many pesticides, and the multiple generations often observed in Wisconsin, diamondback moths are increasingly becoming important in our cole crops industries. Diamondback moths overwinter as adults and are therefore an early season pest. However, cold winters increase mortality (except in protected sites). In early spring, females lay eggs on weeds in the mustard family. The first instar larvae (larvae between molts) mine between the leaf surfaces. After completing four larval stages they spin white silk cocoons on the lower portion of the plant. There are typically 3 to 5 generations of diamondback moths per year in Wisconsin.

This past week (June 18-25), we are observing the completion of the second generation of diamondback moths across southern Wisconsin. Many later instar larvae and pupae have been observed infesting susceptible cole crops (cabbage, broccoli, cauliflower, kale, Brussels sprouts, collard greens, etc), and an active third generation will likely emerge in early July. The imported cabbageworm will feed on all ages of leaves but prefers the younger leaves. The cabbage looper often feeds between veins on the underside of lower leaves. Diamondback moth larvae initially mine the plant tissue and consume only the middle layer of the leaves. As larvae grow, they exit the leaves and consume all tissues except the thin layer of transparent wax. This type of damage resembles windowpanes and is characteristic of this pest.

Severe feeding damage stunts cabbage and cauliflower heads. Larval damage to the developing bud on young cabbage can cause the head to abort. The copious quantity of greenish-brown frass, or excrement, produced by the larvae is problematic because it contaminates heads and foliage.

Scout fields weekly throughout the remainder of the production season and look for direct leaf damage. Examine the lower leaves of the plant for the larvae of each pest. Although feeding damage and fecal material are signs of activity, it is better to rely on larvae counts to determine the level of infestation. Caterpillars cause varying amounts of damage depending on the plant’s maturity, so the need for treatment changes as the crop grows.

Treatment thresholds are well established and based on the percent of infestation by any lepidopteran species. Economic thresholds (ETs) vary based on the stage of crop development. Cabbage, broccoli and cauliflower in the seedbed are particularly susceptible to damage. Therefore, control measures are warranted when 10% of the plants are affected. Between transplant and cupping, the ET is raised to 30%. From the time plants begin to cup until early heading, if more than 20% of plants are infested, treatment is warranted. From early heading until harvest, the threshold again drops to 10% to protect market quality of the produce. When you transplant broccoli or cauliflower and it produces flowers or curds, increase this threshold to 50%. When flowers or curds begin to develop, the threshold again drops to 10% to maintain marketable quality.

Squash vine borer – (https://vegento.russell.wisc.edu/pests/squash-vine-borer/). The squash vine borer is a sporadic pest of pumpkin and squash (e.g. cucurbits). Activity of adult moths and larvae often occurs as the crop is expanding rapidly from late June until the first of August. Resulting damage can be difficult to diagnose prior to significant harm to the plant occurs. In years of heavy infestation squash vine borer can become a significant economic pest in some cucurbit crops.

Adult squash vine borer is a day-flying clearwing moth that is commonly confused with a large wasp. Forewings of the adults are greenish-brown while the hindwings are transparent with a fringe of reddish-brown hairs. Wingspan is approximately 3 cm. The abdomen is typically rusty orange with black spots along the dorsal margin. Hind legs are typically covered with tufts of orange and black hairs. Larvae of squash vine borer are creamy white with brown head capsules. Mature larvae are about 2-2.5 cm length (see inset).

Beginning in late June to early July adult vine borers emerge from the ground. In the Midwest the pest typically emerges after 1,000 growing degree-days (base 50°C) have been reached. Often, this degree day threshold will closely coincide with full bloom of the common roadside weed chicory. Newly emerged female moths quickly seek suitable hosts and begin laying small, brown eggs singly at the base of susceptible plants. Each female is capable of laying between 150-200 eggs. Depending upon temperature, eggs will hatch within 10-15 days of being laid. Newly hatched larvae quickly bore into the vine stems to feed for four to six weeks. As the larvae feed, they leave behind characteristic light brown frass (insect feces) that resembles sawdust. Larvae typically feed at the center of host plant stems this internal feeding greatly restricts the plant’s ability to move water and nutrients. Fully-grown borers exit the stems and burrow into the soil to pupate. Squash vine borers produce one generation per year in Wisconsin.

Squash vine borer is very difficult to manage with chemical insecticides since older larvae are protected within the plant stem. The target life-stage for conventional chemical management is newly hatched larvae that have not yet entered the stem. Effective control requires insecticide residue to be in place before and during the egg laying period (1,000 DD50). Two to three successive applications of insecticide 5-7 days apart will adequately control most of the larval borers before entering the vines.

Current P-Day (Early Blight) and Disease Severity Value (Late Blight) Accumulations.  Thanks to Ben Bradford, UW-Madison Entomology; Stephen Jordan, UW-Madison Plant Pathology; and our grower collaborator weather station hosts for supporting this disease management effort again in 2022.  A Potato Physiological Day or P-Day value of ≥300 indicates the threshold for early blight risk and triggers preventative fungicide application.  A Disease Severity Value or DSV of ≥18 indicates the threshold for late blight risk and triggers preventative fungicide application.  Red text in table indicates threshold has been met or surpassed.  TBD indicates that data are To Be Determined as time progresses.  Weather data used in these calculations will come from weather stations that are placed in potato fields in each of the four locations, once available.  Data from an alternative modeling source: https://agweather.cals.wisc.edu/vdifn will be used to supplement as needed for missing data points.  Data are available in graphical and raw formats for each weather station at:  https://vegpath.plantpath.wisc.edu/dsv/.

In addition to the potato field weather stations, we have the UW Vegetable Disease and Insect Forecasting Network tool to explore P-Days and DSVs across the state (https://agweather.cals.wisc.edu/vdifn).  This tool utilizes NOAA weather data (stations are not situated within potato fields).  In using this tool, be sure to enter your model selections and parameters, then hit the blue submit button at the bottom of the parameter boxes.  Once thresholds are met for risk of early blight and/or late blight, fungicides are recommended for optimum disease control.  Fungicide details can be found in the 2022 Commercial Vegetable Production in Wisconsin Guide, Extension Document A3422, linked here: https://learningstore.extension.wisc.edu/products/commercial-vegetable-production-in-wisconsin

I utilized the UW Vegetable Disease and Insect Forecasting Network tool to populate the Hancock risk values in the table above.  According to usablight.org there have not been recent diagnoses of late blight in tomato or potato crops in the US.  For this year, there were just 2 reports entered back in March in southern Florida (US-23 clonal lineage/strain type).