This week should be the last week of conducting fertigation on commercial farms. In our fertigation trial, plants showed remarkable difference between the control treatment (only 40 units of seasonal total N) and higher N rate (250 total N) as well as between the two varieties Colomba and Snowden. 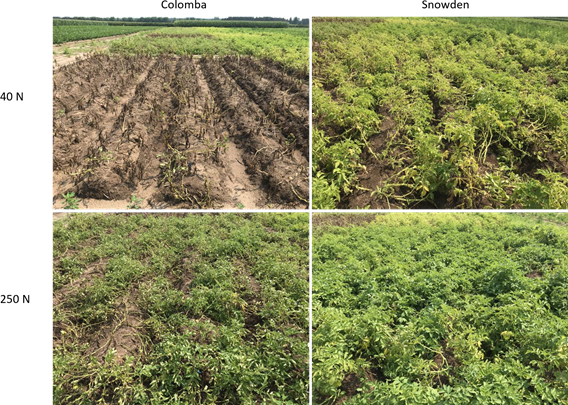 We can tell that Coloma under the control has completed died, and Snowden under the control had bright yellow canopy color and showed senesced leaves and stems. Comparatively, both varieties under the 250 N treatment are still green. Overall, Coloma is about a week to two weeks ahead of Snowden, although both were planted on the same day (April 20th). Both varieties will be harvested for full season evaluation.

This week (105 days after planting / 77 days after emergence) my team again did the digging for Russet Burbank and Soraya potatoes that were under four different nitrogen treatments. The four N treatments are listed below:

From the tuber bulking data we can see that compared to last week, Soraya has put on significant tuber weight and size. Tuber set per plant has been consistent over the weeks for both varieties under all N rates. We kept seeing the trend that RB showed higher yield under the control treatment, whereas Soraya had yield response as nitrogen rate increased. The picture below clearly showed that average tuber size of RB was larger under the high N rate than under the low N rate. 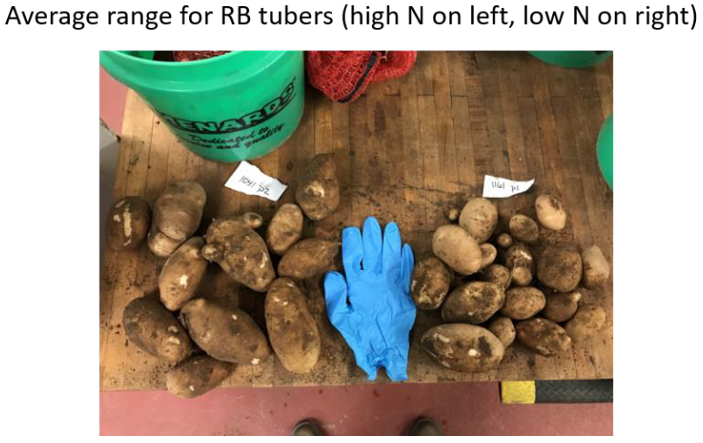 All potato fields of Wisconsin have reached/surpassed the threshold for Disease Severity Values (18) and should continue to be preventatively treated for late blight management. Accumulations over the past week ranged from 5-14 DSVs, indicating moderate to high risk from disease-promoting weather. No reports of late blight from this past week for WI or the US. Late blight (US-23 clonal lineage) was confirmed in one commercial potato field in Portage County, Wisconsin on July 28, 2021. While further away in spatial relevance, tomato late blight was also confirmed in northeastern Georgia on July 28, 2021 (Rabun County) (usablight.org). For more information on this disease: https://vegpath.plantpath.wisc.edu/resources/potato-late-blight/

Emergence of the second generation of Colorado potato beetle (CPB) adults has been underway since mid-July. These adult beetles can feed voraciously and severely defoliate a crop quickly if left untreated. If the condition of the host plants are good, a small portion of these second generation adults will attempt to produce another (3rd) generation. Under normal conditions, these adults may be able to produce only a partial 3rd generation and then will seek overwintering sites as the crop begins to senesce. Typically, there are two discrete generations of beetles per year in South-Central Wisconsin and only a single generation in Northern Wisconsin. As temperatures in the mid-summer have increased over the past 20-30 years and fall temperatures have become more conducive for insect development, we plan to see greater success of a 3rd generation in central Wisconsin.

Many locations, however, are experiencing only low to moderate populations of CPB as a result of very good control that has been achieved targeting larvae of the earlier generation (June). In this instance, producers and pest management practitioners should monitor populations and evaluate defoliation levels. Post-flowering potato canopies can withstand up to 8-10% defoliation without suffering any economic loss in tuber yields. Defoliation is always a challenge to estimate in the second half of the production season when canopies lay down and other maladies in the canopy (eg. early blight) are often more prevalent.

CPB adults that have emerged in mid-July through early August will then be burrow into the soil and overwinter as adults in September. Typically, these overwintering adults will burrow 8-24” into the soil, often choosing protected areas near trees or in grassy edges surrounding fields where potatoes were grown in the current year. During the next season’s emergence in the spring, overwintered adults often colonize crops along field edges adjacent to, or near to the areas in which they overwintered. This simple fact is why we often stress rotation distances exceeding 400 m (0.25 mi) from previous year’s potato. Visit the Vegetable Disease and Insect Forecasting Network website to view the Colorado Potato Beetle risk model.

The risk for transmission of Potato virus Y (PVY) into seed potato remains high to very high for seed production areas in northern Wisconsin. Recall that the risk of PVY transmission by aphid vectors begins around 1967 Fahrenheit degree days (FDD), peaks around 2473 FDD, and ends around 3228 FDD. The PVY transmission risk is calculated from a combination of several aphid species, the relative abundance of each species in Wisconsin, and the estimated transmission efficiency of each species. The predominant aphid species we include in our Wisconsin model are Soybean aphid, Bird cherry-oat aphid, Green peach aphid, Pea aphid, Corn leaf aphid, and Potato aphid.

Do not simply rely upon at-plant insecticides or paraffinic oils as means of limiting PVY. Try to locate your fields away from other PVY sources (isolation in space) and also vine kill as early as possible (isolation in time) once you achieved an appropriate yield and size profile. Use border crops to surround high-valued seed lots. Borders consist of plants, or crop species, that cannot support infection of PVY. The non-host border is planted around small, early- generation seed lots, <0.2 ha field size, with fallow land around the outside of the border and no skips within the crop-plus-border area. The border buffers the potato seed lot from the in-flight of aphids, because the aphids usually land at the interface between fallow ground and green crop.

Spraying for colonizing aphids may reduce spread of PVY within the field under some circumstances. Spray only when scouting indicates colonizing aphid populations are present, including green peach and potato aphid. Spraying insecticides for immigrating winged aphids (colonizing or non-colonizing) is NOT effective in controlling the spread of PVY into a field. Paraffinic oils are intended to reduce the spread of PVY by interfering with the aphids’ interest to puncture the leaf surface. Recall that many aphids will alight upon and attempt to probe the underside of leaves, and for this reason good coverage of paraffinic oils is critical. To be most effective, ensure that your spray particles are reaching the top and bottom of leaves, and this can be best achieved with cone-type spray tips combined with higher pressures (eg. 40+ psi) and higher delivery volumes (eg. 40 gpa). These oils must be applied frequently to cover new growth and oil dilution due to rain or irrigation. Visit the Vegetable Disease and Insect Forecasting Network website to view the Potato virus Y transmission risk model.