Reports by commercial growers indicated that the past 10 days have been nice for potato tuber bulking due to good temperature and decent soil moisture. Particularly, Russet Burbank were able to catch up fast compared to its slow growing pace previously caused by the heat in June. Overall there were not many crazy rainfall events that led to leaching concerns and low petiole nitrate level in Central Wisconsin. Some early season potatoes needed to be delayed for harvest by about one week due to the frost damage over the Memorial Day weekend. Digging reports showed that overall we are getting average to slightly higher than average yield so far this season in Wisconsin. Some conversations with potatoes researchers in other states especially out west indicated that the smoke caused by wild fire has substantially impacted growing degree days and tuber bulking potential, on top of the severe ongoing heat stress in the west. This week (98 days after planting / 70 days after emergence) my team again dug our Russet Burbank and Soraya potatoes that were under four different nitrogen treatments and found interesting tuber bulking results. The four N treatments are listed below (lbs N/acre):

From the tuber bulking data we can see that all plants kept growing larger tubers, including the treatment under only 40 units of N from starter. Like last week, we saw the highest total yield from the control treatment for Russet Burbank, but the highest total yield from the highest N rate at 250 N for Soraya. No difference of specific gravity under varied N rates for each variety, although numbers of Russet Burbank are overall higher than those of Soraya.

Below are some drastic difference of canopy size and canopy color between the lowest N rate and the highest N rate for the two varieties. 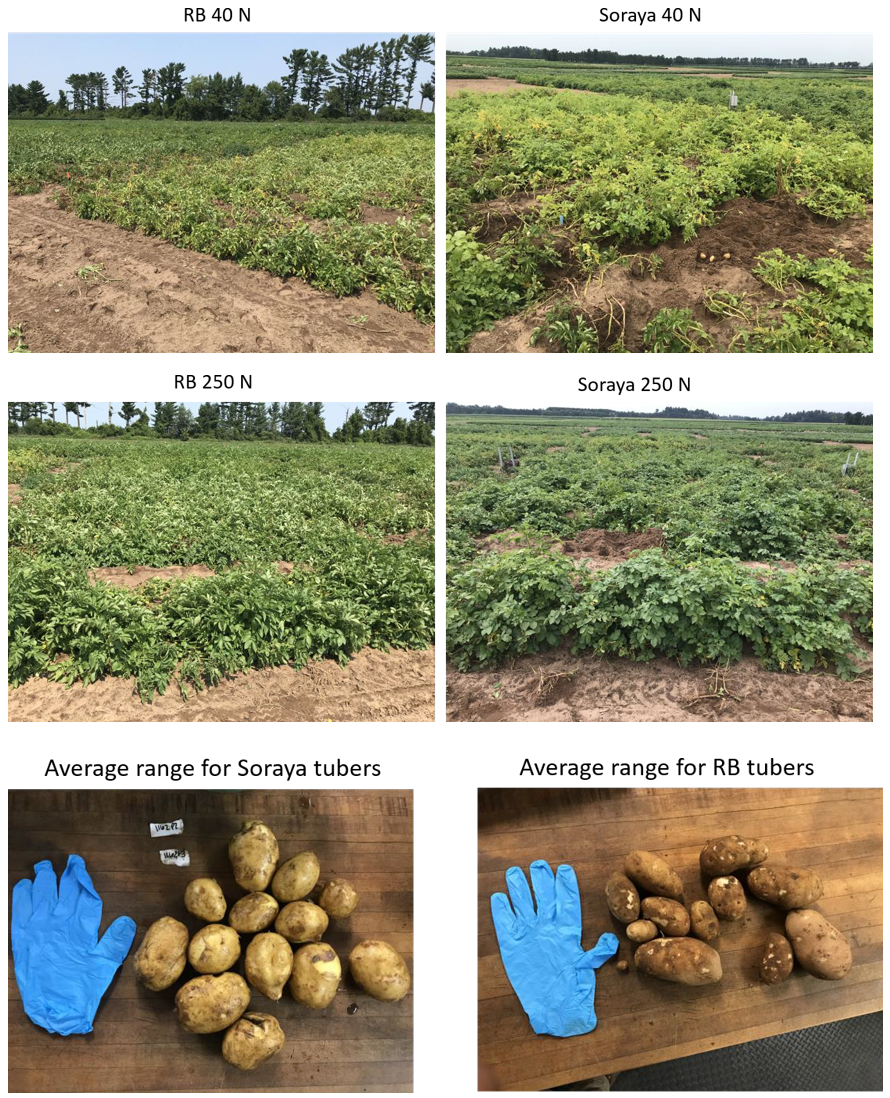 This year we also had a fertigation trial at UW HARS. The trial was designed to compare effects of nitrogen source from fertilizer and from irrigation water. We included Colomba, a European variety feature by high nitroge use efficiency and Snowden in this trial. The photos below showed the clear difference between canopy size and canopy color of different N treatments. We are tracking petiole nitrate and the groundwater nitrate levels in this study. 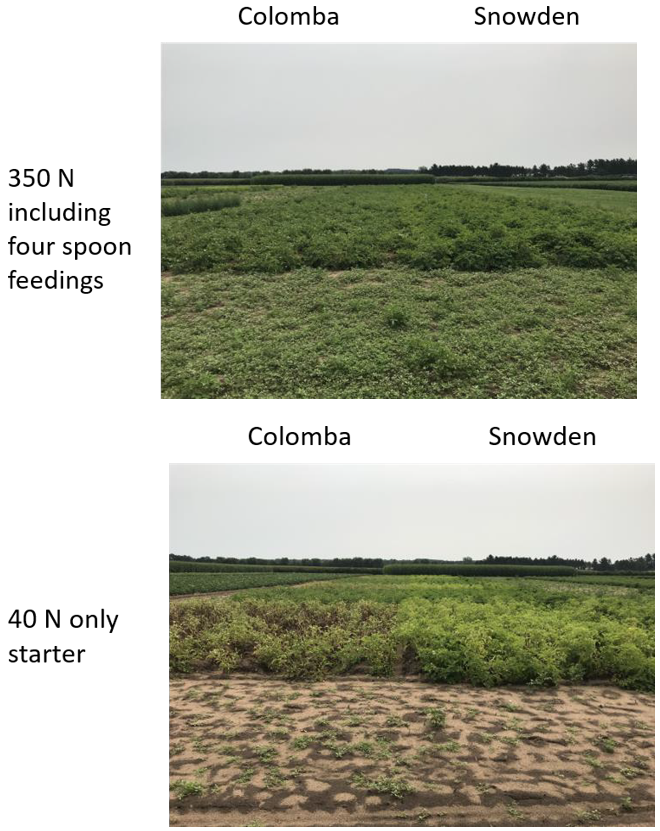 All potato fields of Wisconsin have reached/surpassed the threshold for Disease Severity Values (18) and should continue to be preventatively treated for late blight management. Accumulations over the past week were only 3- 6 DSVs, indicating moderate risk from disease-promoting weather. Late blight (US-23 clonal lineage) has been confirmed in one commercial potato field in Portage County, Wisconsin on July 28, 2021. The infected plants were killed last week and the remainder of the field has been intensively managed for late blight. While further away in relevance, tomato late blight was also confirmed in northeastern Georgia on the same day (Rabun County) (usablight.org). For more information on this disease: https://vegpath.plantpath.wisc.edu/resources/potato-late-blight/

The early blight P-Day threshold of 300 has been exceeded in all potato plantings of Wisconsin. Early blight is active around Wisconsin in the lower and mid-canopies. Foliar evaluations in our UW Hancock Agricultural Research Station early blight fungicide trial have shown non-treated controls with up to 40% early blight severity on Thurs of this past week. A listing of details of currently registered fungicides for early blight management can be found in our 2021 Wisconsin Vegetable Production guide: https://cdn.shopify.com/s/files/1/0145/8808/4272/files/A3422-2021.pdf

Cottony Leak in Vegetables: Sometimes referred to as Pythium fruit rot or Pythium cottony leak, this disease is caused by Pythium spp. that are common soil members. Pythium is grouped with the ‘water mold’s or oomycetes which also include pathogens causing late blight and downy mildew. The pathogen grows optimally at 82°F and can survive from season to season as soilborne oospores in the soil. Spores can be moved with the soil, in water, and on equipment with soil/water residue. This disease has been noted in a few locations in Wisconsin over the past week. Cucumber is most susceptible to this disease, but other fruiting specialty vegetable crops can be infected when soils remain wet for prolonged intervals.

Signs and Symptoms: On vegetable fruit, symptoms begin as brown, water-soaked lesions that quickly develop into soft, rotted areas on the part of the fruit that is in direct contact with the soil (see pepper fruit in figure above, from one of my field visits last week). Under humid conditions, white, cottony pathogen growth may be produced and cover the rotted area of the fruit. The mycelial growth produced by the cottony leak pathogens can confused with that produced by species of Phytophthora (Phytophthora crown and fruit rot) or Sclerotinia (white mold). In cucumbers, a dark green to brown blister may develop before the previously mentioned symptoms. Notably, the internal cavities of infected peppers are filled with dense white, cottony growth. The fruit rapidly break down within about 72 hours of infection. My sample collection from evening to the next morning turned from soft fruit to liquid even under refrigeration!

Management: Preventing and managing cottony leak in vegetables is challenging. Cultural management includes planting into well-drained soils. Soils should be able to drain rapidly after a heavy rainfall. Use sufficient plant spacing to help support airflow in the lower canopy. In fields with a previous history of cottony leak, consider increasing the in-row spacing interval beyond the widest recommended interval. Using plastic row cover/mulch can help provide a barrier between fruit and soil, but be cautious as depressions in the plastic can hold water and make fruit contact. Selecting a field site with a non-host (grains, grasses, corn) in the previous season. Without a host crop, the soil inoculum quantity will decline over time and reduce risk of Pythium disease in future years. Chemical management includes fungicides specific to water mold disease control such as mefenoxam or metalaxyl (ie: Ultra Flourish or MetaStar – FRAC Group 4 fungicides with risk for resistance development in the pathogen population). These fungicides are most effective when applied as a pre-plant or soil surface application.

DATCP’s Home Pest Survey (https://datcp.wi.gov/Pages/Programs_Services/CornEarworm.aspx) reports on increasing adult counts of Corn earworm (Helicoverpa zea) adults in Hartstack-baited, pheromone traps placed around southern Wisconsin. This increase in flight activity of adult moths should signal to producers a need to be diligent with regard to protection of susceptible crops. The corn earworm can cause serious economic damage to fresh market and processing sweet corn and hybrid dent seed corn. Also known as the tomato fruit worm, the larvae feed on field corn, tomatoes, lettuce, peppers, and snap beans. In sweet corn, larvae feed in the tips of the ears, devouring kernels and contaminating the ear. While even severe infestations damage fewer than 10% of the kernels, this amount is sufficient to cause serious economic losses in fresh market sweet corn due to consumer rejection, and in hybrid dent seed corn due to the high value of the crop. The value of processing sweet corn suffers as well since damaged tips must be removed before processing. Although some earworm damage can be found in commercial dent corn fields, the extent of loss is less severe and doesn’t warrant control. 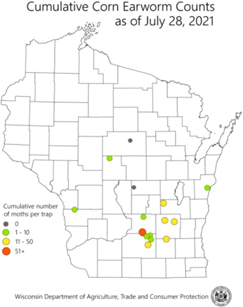 Few corn earworms survive winter in Wisconsin. Instead, they overwinter as pupae in more southern states. In early spring, the pupae complete their development and emerge as moths in early May. Some of these moths migrate northward, flying mainly at dusk or during warm, cloudy days. In the north, a few pupae survive Wisconsin winters to complete development in the spring. As a result, sweet corn growers may find some adult moths in traps in the early season. This overwintering generation rarely poses a problem in early planted sweet corn. The more damaging migratory adults appear in early August extending into September. Fresh market sweet corn is susceptible to early- and late-season damage.

Corn earworm development can be predicted using degree day models, although it is important to set the biofix to the date that you first see corn earworm eggs (typically around Aug 1). From captures reported by the WI DATCP, the attached map uses as biofix of July 22. Visit the Vegetable Disease and Insect Forecasting Network (VDIFN) website to view the corn earworm degree day model and models for many other common insect pests. Risk models available here can be modified according to your local conditions, and users can change the biofix date to better match their local conditions. (https://agweather.cals.wisc.edu/vdifn?panel=insect&model=corn-earworm). Using July 22 as an early indication of adult activity, the model illustrates an increasing and enhanced risk for migration and movement of adult moths in the very southern and western regions of the state where degree days have accumulated sufficiently following the initial capture of adult moths in the area. 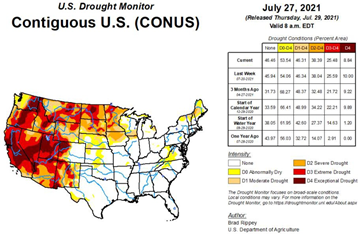 The USDA Drought monitor illustrates only localized areas of Wisconsin where moderate to severe drought remains as of 29 July 2021. In areas of the state where these conditions continue, the risk for damaging populations of two-spotted spider mites is increasing. The two- spotted spider mite (TSSM, Tetranychus urticae), is considered widespread in distribution and has been observed infesting > 500 species of plants, including vegetable crops. Vegetables that are often affected include cucumbers, beans, lettuce, peas, potatoes and tomatoes. 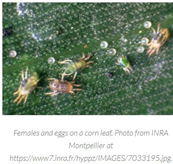 Two-spotted spider mites are barely visible with the naked eye – usually only 0.5 mm in length when mature and are often observed in groups on leaf undersides during early infestation. They vary in color depending upon the host plant infested and range from light yellow or green to dark green or brown. All adults possess the characteristic, two dark spots visible on the abdomen. They damage plants by piercing cells with their mouthparts and sucking sap. Because of their reduced size, damaging populations often go unnoticed until significant yield loss has occurred. Recognizing early damage symptoms is very important. As the mites feed on the underside of leaves, they remove leaf cell contents, including the chlorophyll that gives the leaves their green color. Without the chlorophyll, those empty cells appear whitish, silver or bronze. Heavily infested leaves turn completely pale, dry up, and fall off. Large populations can severely defoliate or kill plants. Early symptoms are often called stippling and can be described as flecking on the leaves.

With weather forecasts of continued dry conditions and seasonable temperatures, producers and scouts should remain vigilant in checking for early mite populations. TSSM are often first observed along field edges, especially if there are weeds surrounding the border. Eventually they disperse with the wind into fields and can develop a field-wide infestation if weather conditions permit. Timely late summer, patterned rainfall can be very beneficial to limit developing populations of TSSM, but dry weather will only increase the risk for their population emergence at this time of year.