This week I am showing some aerial images that were taken from our fertigation trial. The objective of the trial was to evaluate effects of nitrogen credits in groundwater on growth of two potato varieties Snowden and Colomba. We have four treatments in this trial. Treatment A is a control. Treatment B and C had the same total seasonal N rate, with B having N applied up until tuber initiation, and C having N split between tuber initiation (small amount), and four fertigation events. Treatment D is an over-application rate. Below are the N application schemes of the four N rates. 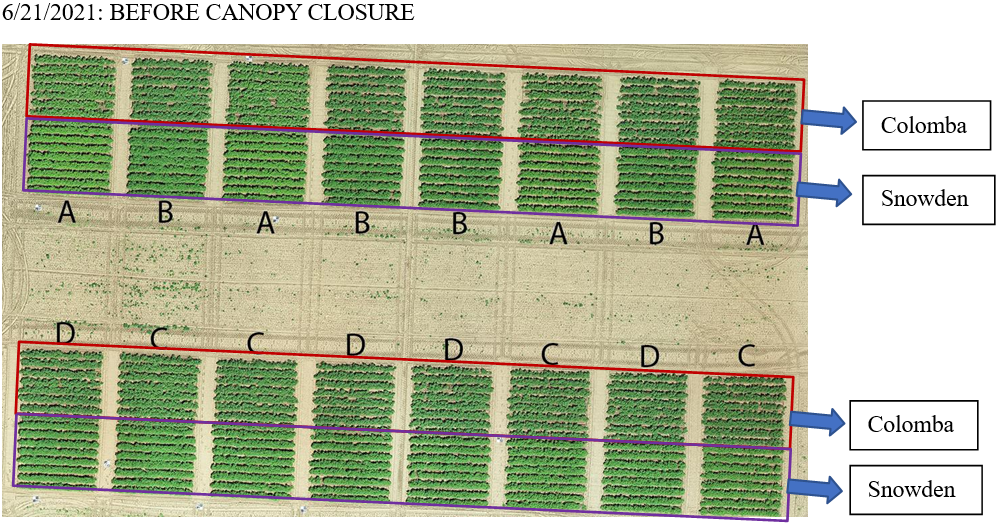 From the images taken on July 13th, plots under the control treatment started to be clearly yellow, whereas plots under the other three treatments had darker green colors. Colomba plants under the control treatment started to senesce on July 20th, and we can see that Colomba were almost 100% senescent on July 29th. Snowden progressed at a slower pace compared to Colomba, under each N rate. It is also noticed that Snowden plants under the control started to go down on August 3rd, while plants under other three treatments were still vigorous and healthy. From the aerial images, we cannot simply eyeball difference between treatment B, which had a large amount of N applied at tuber initiation, and no fertigation; treatment C that had a small N application at tuber initiation, but received four fertigation events during tuber bulking; and treatment D, which is a combination of treatments B and C. We are testing the groundwater nitrate-N level in the field and will be able to calculate how many N credits we get from irrigation water. We are also testing petiole nitrate-N for all treatments during the period that we collected aerial images. 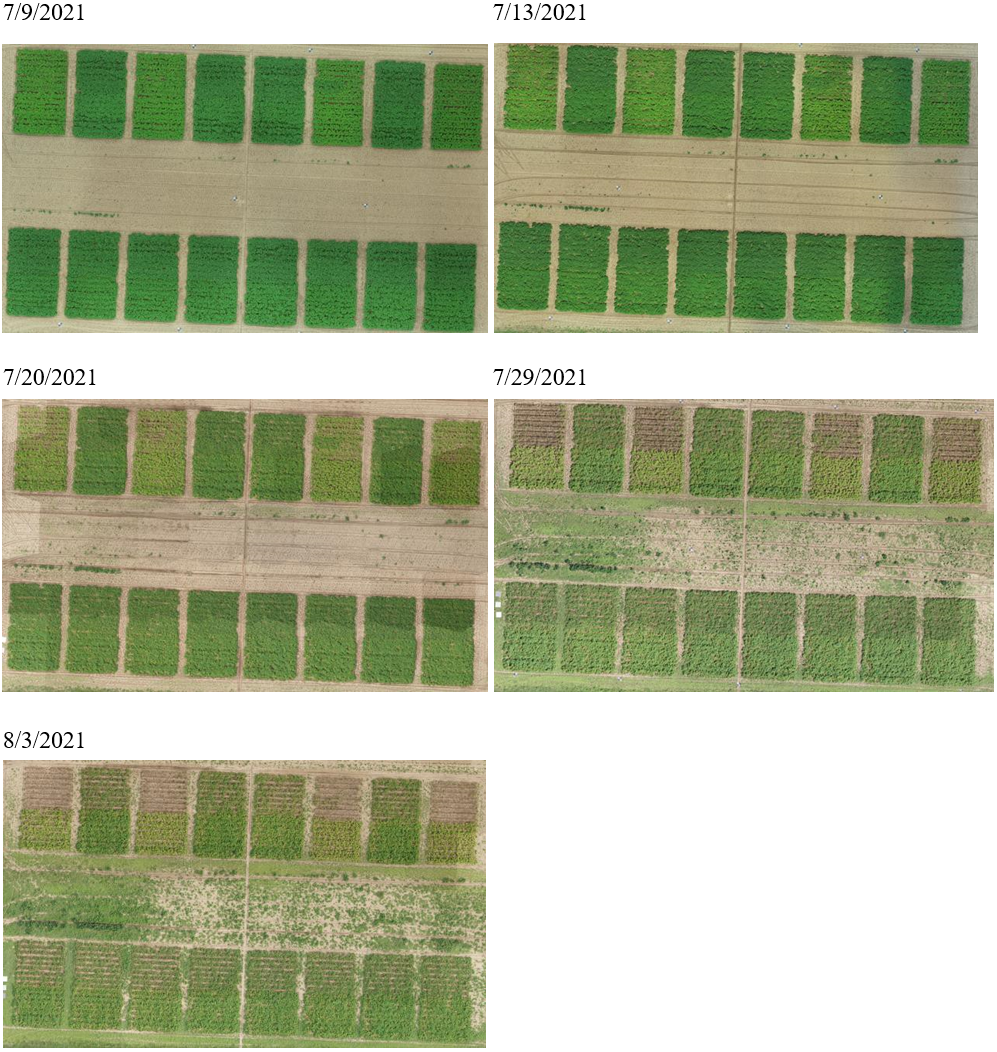 All potato fields of Wisconsin have reached/surpassed the threshold for Disease Severity Values (18) and should continue to be preventatively treated for late blight management. Accumulations over the past week ranged from 6-10 DSVs, indicating moderate risk from disease-promoting weather. An additional field in the Plover area (Portage County) of WI was determined to have late blight this past week (Aug 9). The pathogen was of the US- 23 clonal lineage – as we determined in the case of the earlier diagnosis near Bancroft on July 28. Outside of Wisconsin, tomato late blight was confirmed in Ontario (Haldimand-Norfolk) Canada (Aug 10), US-23 potato late blight was confirmed in Aroostook County Maine (Aug 9); tomato late blight was also confirmed in northeastern Georgia on July 28, 2021 (Rabun County) (usablight.org). US-23 is typically sensitive to the fungicides in the phenylamide group (including mefenoxam and metalaxyl). For more information on this disease: https://vegpath.plantpath.wisc.edu/resources/potato-late-blight/

This season, so far, the disease has been documented in AL, CT, DE, FL, GA, IN, KY, LA, MA, MD, MI, MS, NC, NH, NJ, NY, OH, Ontario Canada, PA, RI, SC, TN, VA, and WV. There is no predicted movement of the pathogen into Wisconsin at this time– as reflected in the recent forecast (for Sunday August 15 , 2021) depicted below from https://cdm.ipmpipe.org/

Due to the presence of unique pathogen types (Clade 1 and 2 types with unique host ranges among cucurbits), our improved understanding of the cucurbit downy mildew type that may be in our region can aid in recommending the most appropriate prevention of crop disease and resulting loss.