On August 3rd, we dug 6 plants from the Plover Russet and GoldRush plots under different N rates. Based on the five time points of digging Plover Russet, I made a table that shows its tuber bulking rate under each N treatment:

Progression of total yield for Plover Russet over the season is displayed in the figure below. 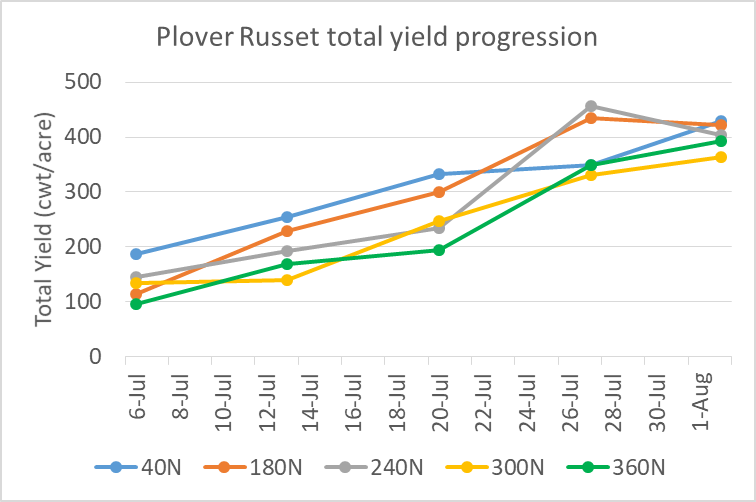 For GoldRush, we also dug 6 plants from each N rate on August 3rd. 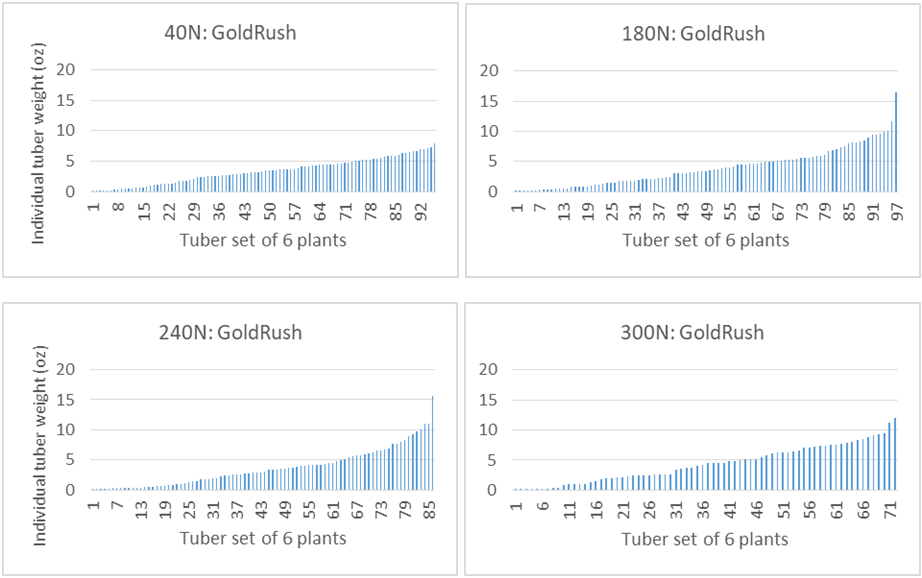 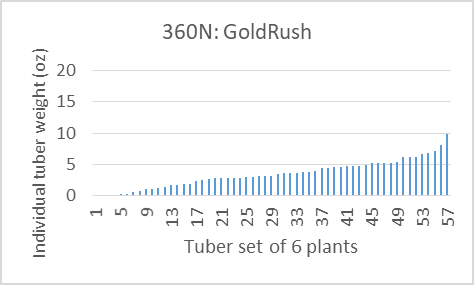 Similar to what we have found before, higher N rate particularly under 300 lb/acre resulted in less tuber set per plant but higher percentage of marketable tuber sizes that are larger than 4 oz. Table below shows the marketable yield % of GoldRush under each N rate on August 3rd, which was 73 days after emergence. Both Plover Russet and GoldRush are scheduled to be vine killed on August 10th and harvested on August 24th.

Current P-Day (Early Blight) and Disease Severity Value (Late Blight) Accumulations: (Many thanks to Ben Bradford, UW-Madison Entomology; Stephen Jordan, UW-Madison Plant Pathology). A P-Day value of ≥300 indicates the threshold for early blight risk and triggers preventative fungicide application. A DSV of ≥18 indicates the threshold for late blight risk and triggers preventative fungicide application. Red text in table indicates threshold has been met/surpassed. TBD indicates that data is To Be Determined as time progresses. Weather data used in these calculations comes from weather stations that are placed in potato fields in each of the four locations. Data are available in graphical and raw data formats for each weather station at: https://vegpath.plantpath.wisc.edu/dsv/

Late Blight Management: Our DSVs are reported here from emergence to August 7. Over the past week, we saw very modest accumulations throughout the state due to very dry weather and relatively lower temperatures. Plantings of potatoes in the Grand Marsh, Hancock, Plover, and Antigo areas have exceeded threshold and should receive routine (~weekly) preventative fungicide application for late blight management.

Early Blight Management: PDays are exceeding the threhold of 300 for early planted potatoes in Grand Marsh, Hancock, Plover, and Antigo areas. Totals are rapidly accumulating with higher temperatures. For more information about fungicide selections, please see the Potato section of the A3422 Commercial Vegetable Production Guide for Wisconsin, 2020. https://cdn.shopify.com/s/files/1/0145/8808/4272/files/A3422-2020.pdf

National late blight update: No new reports of late blight in the US or Canada this past week. Potato late blight was reported in British Columbia, western Canada (Delta and Surrey) about 2 weeks ago now. The site: https://usablight.org/map/ includes reports as they are submitted in the US. Previous reports documented the disease in NC, FL and AL. Where the late blight pathogen has been tested in the US so far this year, the clonal lineage has been US-23. Dr. Andy Robinson’s potato newsletter “Spud Scoop” of Aug 7 2020 from NDSU and Univ. of MN Extension indicated that there were no field reports of late blight but that pathogen spores were found in traps in Lake Bronson (MN), Oakes (ND), and Perham (MN). This suggests that, at least in these locations, if favorable weather occurs, late blight is likely. Preventative fungicides are a good option in such cases.