Is metabolic herbicide resistance the straw that will break weed management’s back?  In a long-term tillage research project in Kansas, a Palmer amaranth population was identified that was resistant to six herbicide sites of action in individual plants.  While that’s challenging enough, here’s the scariest part: in some cases the plants had evolved resistance to herbicides that had never been sprayed in the field (Shyam et al. 2021).

Similarly, in Illinois a waterhemp population was recently identified that’s resistant to dicamba, yet the field had never been treated with dicamba or 2,4-D.  The population was also resistant to five other herbicide sites of action, which may have been the source of resistance to the sixth herbicide site of action that includes dicamba (see https://aces.illinois.edu/news/first-dicamba-resistant-waterhemp-reported-illinois for an informative summary of this work).

Weeds that have become resistant to herbicides they’ve never been sprayed with may sound like something out of a CSI type show.  The phenomenon is not new but is becoming more common.  In fact, one of the potential causes – metabolic resistance – isn’t even limited to plants.  So how could this happen?

Herbicide metabolism involves the breakdown of the active ingredient into metabolites that are less mobile and less toxic to the plant, and then the “dumping” of the metabolites into plant parts where they are sequestered and not active.  Enzymes cause the breakdown, and two of the most involved include cytochrome P450 monooxygenase (P450) and glutathione S-transferase (GST).  P450s are among the most common enzymes in living organisms and have the ability to metabolize 11 of the 26 herbicide modes of action.  GSTs are also common in living organisms and are responsible for some grass tolerance to herbicides and some observed cases of insecticide resistance (Rigon et al. 2020).  Crop safety with many herbicides is based on metabolism by these broad enzymatic families.

Herbicide metabolism has been researched and observed over the past few decades with challenging grass weeds such as rigid ryegrass in Australian wheat production (Yu and Powles 2014).  More recently, however, metabolic resistance has been reported among broadleaf weeds and close to home.  For example, metabolic resistance to the herbicide S-metolachlor was reported in two waterhemp populations in Illinois (Strom et al. 2020).  In this case the resistant waterhemp metabolized 90% of the S-metolachlor in less than 3.2 hours.

Metabolic resistance has sometimes been referred to as “creeping resistance” because of the way that it evolves in populations, where plants that can survive low herbicide doses by metabolizing some of the active ingredient produce seed, and subsequent generations are selected that can metabolize more and more herbicide until they are no longer useful for control.  For example, waterhemp control with dicamba in the Illinois population noted above decreased from 80% to 65% over just a few years, and dicamba wasn’t even sprayed during that time.

So why is metabolic resistance so concerning compared to target site resistance that’s been addressed for years?  Target site resistance is very specific to an herbicide active ingredient, the individual target site that it binds to, and a mutation that changes those puzzle pieces.  In contrast, in metabolic resistance the enzymatic activity that breaks down the herbicides and other toxins is not specific.  Once high metabolic activity is selected for, the plant can breakdown a broad range of herbicides across modes of action, potentially including active ingredients that have never been sprayed on that population before, and even herbicides that have yet to be discovered.  For example, in the Kansas study mentioned above, the authors concluded that “these results suggest predominance of metabolic resistance possibly mediated by cytochrome P450 and GST enzyme activity that may have predisposed the KCTR Palmer amaranth population to evolve resistance to multiple herbicides” (Shyam et al. 2021).  In practical terms, metabolic resistance adds tremendous unpredictability to weed management decision making and outcomes.

These metabolic enzymatic activities are also not specific to plants and herbicides, which makes for complex resistance scenarios.  For example, Clements et al. (2018) reported that some of the fungicides commonly used for potato disease control can upregulate GST enzyme production in Colorado potato beetles, and that increase in enzymatic activity can negatively affect insecticide performance.

Additionally, not only is metabolic resistance more challenging to research than target site resistance, it’s also harder to observe in the field.  For years growers and scouts have been told to keep an eye out for living target plants that normally would have been killed and that are among other dead weeds, and that stark contrast of living versus dead was often the smoking gun of resistance.  In metabolic resistance, the selection pressure creeps along where target weeds may be injured but eventually recover enough to produce a few viable seeds, and the high metabolism selection cycle continues on until multiple herbicides are ineffective.

The increase in likely cases of metabolic resistance observations in recent years speaks to the dire need to develop practical and economical alternatives to herbicides – it’s simply not just about rotating herbicides anymore.  In the short term, much effort is currently being directed to intervening in the seed production and dispersal step of the resistance selection cycle with mechanical tools like combine weed seed cleaners and collectors.  Research is also underway to gain a better understanding of the complex metabolic interactions among pesticides and pests, and how that affects practical management decisions.  In the longer term, alternative technologies like weed sensors and highly efficient robotic weeders need to be developed and available for adoption in reasonable and affordable ways.

Current P-Day (Early Blight) and Disease Severity Value (Late Blight) Accumulations.  Thanks to Ben Bradford, UW-Madison Entomology; Stephen Jordan, UW-Madison Plant Pathology; and our grower collaborator weather station hosts for supporting this disease management effort in 2022.  A Potato Physiological Day or P-Day value of ≥300 indicates the threshold for early blight risk and triggers preventative fungicide application.  A Disease Severity Value or DSV of ≥18 indicates the threshold for late blight risk and triggers preventative fungicide application.  Red text in table indicates threshold has been met or surpassed.  Weather data used in these calculations will come from weather stations that are placed in potato fields in each of the four locations, as available.  Data from an alternative modeling source: https://agweather.cals.wisc.edu/vdifn will be used to supplement as needed.  Data are available for each weather station at:  https://vegpath.plantpath.wisc.edu/dsv/.

Accumulations of P-Days were high (~61 in most locations) over the past week. Potatoes should continue to be on a preventative fungicide program with effective disease management selections to limit early blight in long-season potatoes.

Our UW Hancock Agricultural Research Station foliar early blight management trial on Russet Burbank potato has reached the point where our non-treated controls are completely senesced (pic below on the left).  Some of the ‘best’ foliar fungicide programs are maintaining canopy at roughly 50% coverage (pic below on the right).  This particular treatment includes Bravo WeatherStik and Miravis Prime in a 10-week foliar fungicide program.  We have one final foliar application in this trial which will be harvest in early October. 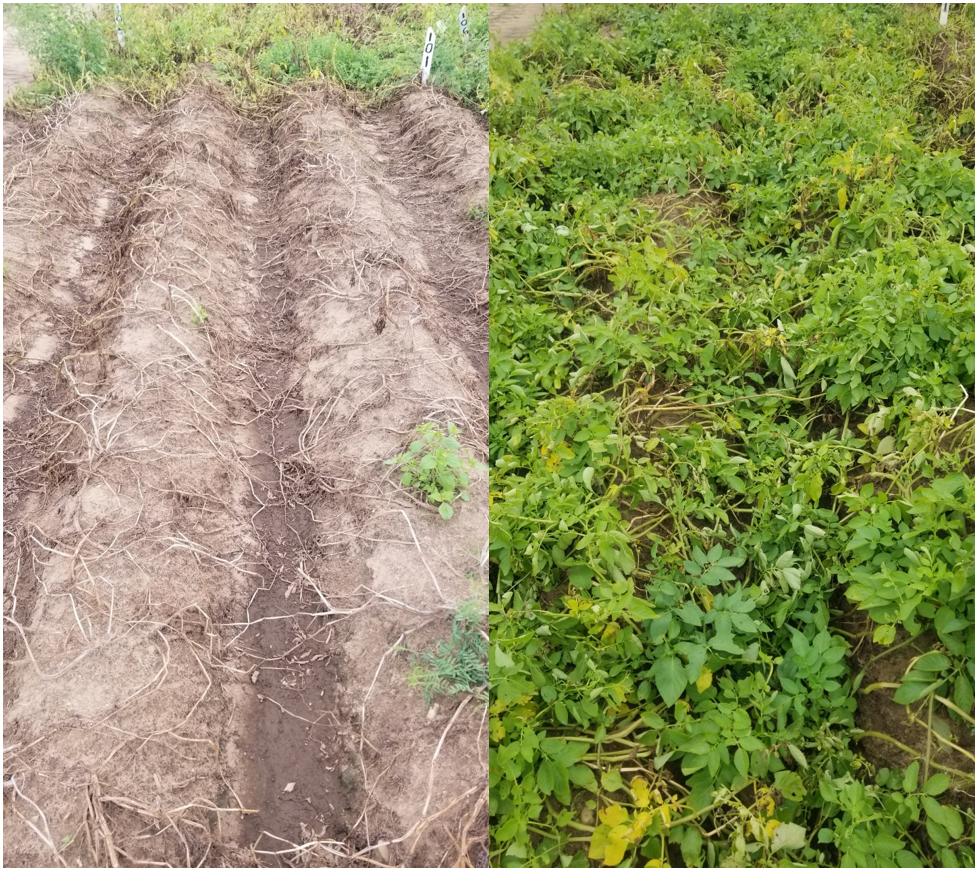 All monitored Wisconsin locations accumulated 0 DSVs this past week indicating low to no risk week for promoting late blight in potato plantings in Grand Marsh, Hancock, Plover, and Antigo.  All plantings have now reached/exceeded the threshold for receiving a preventative application of fungicide for the management of late blight.  A fungicide list for potato late blight in Wisconsin was provided in last week’s newsletter and is available here:  https://vegpath.plantpath.wisc.edu/2022/07/03/update-10-july-3-2022/

To my knowledge, there have been no reports of late blight in Wisconsin on potato or tomato so far this season.  According to usablight.org there were also no diagnoses of late blight in the US in the past week.  Previous diagnoses in the US this season included those in NC, FL, CA, TN, and Ontario Canada.  These have been primarily on tomato, with only the FL report on potato in early spring.

As a reminder, the pathogen is now known to have two ‘strains’ for clade types.  The type (Clade 2) which infects cucumber, can also infect melon.  Due to fungicide resistance within the downy mildew pathogen population, especially in Clade 2, selection of fungicides is important.  Management of cucurbit downy mildew requires preventative fungicide applications as commercial cultivars are generally susceptible to current strains (Clades) of the pathogen.  Management information can be sourced here:  https://vegpath.plantpath.wisc.edu/2022/07/03/update-10-july-3-2022/

Tar spot of sweet corn has been diagnosed in Waushara County in our Midwest Food Products Association-partnered sweet corn variety trials at the end of August. Dr. Damon Smith, UW Field Crops Extension Pathologist had previously diagnosed this emerging disease on field corn in early July in Wisconsin https://ipcm.wisc.edu/blog/2022/07/we-found-tar-spot-of-corn-in-2022-now-what/.  This is a relatively new foliar fungal disease (caused by Phyllacora maydis) of corn crops with potentially devastating effects.  Damon has been developing fungicide programs and disease forecasting approaches for management of this disease over the past few years in field corn and has recently collaborated with me and the MWFPA and other industry partners to address the disease in sweet corn.

A bit more about tar spot of corn:  Growers and processors have indicated recent and growing concern with tar spot in sweet corn (Zea mays) grown on low organic matter soils in central Wisconsin.  The disease has been reported primarily in the Midwestern US and the southeastern US in recent years.  In Latin America, where tar spot is more common, fisheye lesions are associated with another fungus, Monographella maydis, that forms a disease complex with P. maydis known as the tar spot complex.  M. maydis has not been detected in the U.S., to date. Phyllachora maydis is the causal fungus of tar spot of corn and can cause severe yield loss on susceptible hybrids when conditions are favorable for disease (high humidity and prolonged leaf wetness).  Tar spot appears as small, raised, black spots scattered across the upper and lower leaf surfaces (Picture below).  These spots are ascomata (fungal fruiting structures).  Microscopically, hundreds of sausage-shaped asci (spore cases) filled with spores are visible.  When severe, ascomatum can even appear on husks and leaf sheaths.  Tan to brown lesions with dark borders surrounding the ascomatum can also develop.  These are known as ‘fisheye’ lesions.

The pathogen overwinters in infested corn residue.  Residue management, rotation, and avoiding susceptible hybrids may reduce tar spot development and severity.  Some fungicides may also reduce tar spot, although little data exists regarding application timing for efficacy and economic response in sweet corn.  The Corn ipmPIPE helps track the appearance of tar spot (https://corn.ipmpipe.org/tarspot/).  Today’s map from this tool is provided below.  Additional information is aggregated and provided online by the Crop Protection Network (https://cropprotectionnetwork.org/series/tar-spot/publications/tar-spot-preface-and-introduction).

Late in the growing season,  common and southern rust pustules can be mistaken for tar spot ascomata as these rusts switch from producing orange to red spores (urediniospores) to black spores (teliospores).  However, rust spores burst through the epidermis and the spores can be scraped away from the pustules.  Tar spots cannot be scraped off of the leaf tissue.