Injury to plants is caused exclusively by the larval stages of SCM. Larvae will feed in the cotyledons and below-ground hypocotyl (stem) tissue of seedling plants, resulting in a variety of damage symptoms. Feeding damage in germinating seeds will often kill seedlings before they emerge. Poor germination or poor stands of susceptible crops may indicate a SCM problem. In addition to SCM other issues may compromise stand counts and germination. In cool, wet soils common fungal pathogens such as Pythium may result in similar patterns of irregular crop emergence. To best diagnose SCM damage dig up un-emerged seedlings to look for feeding directly on the seed or sprout tissue. Often seedlings will survive below ground feeding but emerge with damage to the first true leaves or have no leaves at all (often called “snakehead” seedlings). Direct damage to the hypocotyl will often appear yellow and wilted.

Management for SCM is only effective when used in a preventative manner. Once direct larval damage is detected there is no control option for the pest. Therefore, there are no economic thresholds for this insect pest. SCM forecasting models predict peak flight windows, and are very useful for growers. Models calculate flights by calculating cumulative degree days beginning when the ground thaws in the spring. In Wisconsin, peak flights of SCM occur at 200, 600 and 1000 cumulative Fahrenheit degree days (FDD). An adult peak is now present throughout much of (very) northern Wisconsin.  The second generation of SCM will soon be developing across southern portions of the state-more to come (Fig 1).

Documenting peak flights can help to forecast subsequent generations of SCM. Adult flies are attracted to volatiles of decaying organisms. Accurate flight information can be monitored using cone traps baited with fermenting molasses, alcohol, bloodmeal, or bonemeal. Sticky traps have also been used successfully to keep track of adult flights at the local scale and are easily obtainable from garden stores.

Since adult SCM is attracted to decaying organic matter, do not plant susceptible crops in fields where animal or green manure has recently been incorporated. The faster planted seeds germinate and grow, the less opportunity the maggots have to damage the crop. There are a few strategies to hasten germination:

Onion maggot ‘peak’ approaching southern Wisconsin – (https://vegento.russell.wisc.edu/pests/onion-maggot/). Similar to the seedcorn maggots listed above, onion maggots are a different species (Delia antiqua) of seed-infesting flies that attack members of the Allium genus (onions, garlic, leek, etc).  The damaging stages are tiny larvae that feed below ground on germinating onion seeds, and early transplants, making tunnels in the developing stems and potentially allowing disease organisms to enter (Fig. 2). These maggots are often the most serious pests of onions, especially where continuous production occurs. Onion maggots are highly host-specific to plants in the onion family, including onions, leeks, shallots, garlic, and chives.

Larvae feed on the hypocotyl (below ground) tissue of seedlings, resulting in various types of damage. Damage appears as wilted and yellowed foliage, followed by collapsed leaves. Leaves can become rotten, and plants may die. Onion plants are most vulnerable during the seedling stage, and larval feeding may kill seedlings. Poor plant stands may indicate an onion maggot problem. Onion maggots can cause damage throughout the season, although they are often an early season pest during stand establishment. At the end of the season, maggot feeding can lead to storage rots. Onion types differ in susceptibility to onion maggot damage, with set onions most susceptible, followed by white varieties, yellow varieties, and finally red varieties which are least susceptible.

It is often too late to attempt control after damage has been detected. Therefore, action thresholds for foliar insecticide applications are based on the emergence of adults. Peak emergence can be forecasted using degree day models. Begin accumulating degree days when the ground thaws. Using a base temperature of 40° F, peak flight for the first three generations will occur at 680DD, 1950DD, and 3230DD, respectively. First generation adult peaks are just entering portions of southern Wisconsin (Fig. 3), and this risk interval will likely advance across the state in the next 10-14 days as warm, summer temperatures prevail.

There are several programs that can be practiced to reduce populations, avoid insecticide resistance and achieve control. Rotating onion crops at least 1 mile between seedlings and previous crops, and isolating onion fields by at least ¼ mile can reduce migration of maggot populations between fields. Avoid green manure, destroy crop debris, and remove culls from field to reduce field attractiveness to egg-laying adults. Planting onion sets 10-14 days before flies are expected to emerge can reduce damage. Preventative soil-applied (banded) insecticide applications are available to control the first generation larvae if damage from the previous year’s crop exceeds 5-10% (A3422, Commercial Vegetable Production in Wisconsin, 2022). Avoid foliar insecticides since they are often ineffective on adult populations.

Begin scouting in early spring and continue throughout the growing season. In spring, sample twenty plants each at five different locations, and in summer, sample ten plants each in five different locations. See scouting thresholds for when to begin treatment. Spring sampling thresholds are designed to reduce spear damage while later-season thresholds are designed to reduce long-term damage caused by defoliation.  Scouting should occur in the afternoon when the beetles are most active.

If insecticides are needed to reduce beetle populations below threshold levels, it is not necessary to treat the entire planting. Rather, you can spot treat those areas where threshold levels have been exceeded. New plantings tolerate less injury than established plantings. Refer to the UW-Extension publication (A3422, Commercial Vegetable Production in Wisconsin, 2022) for a list of registered insecticides and management recommendations.

The development of common asparagus beetles can also be modeled using degree-days (Fig. 5), and are available at the VDIFN website, which features a convenient map-based interface, to view the asparagus beetle model and many others.

It has been very hot over the last several days, with daily max temperature higher than 80°F for four days in a row and not much rainfall. We can definitely see an overall increasing trend of daily temperatures since April 30th, which to some extent could encourage sprout growth and plant emergence. 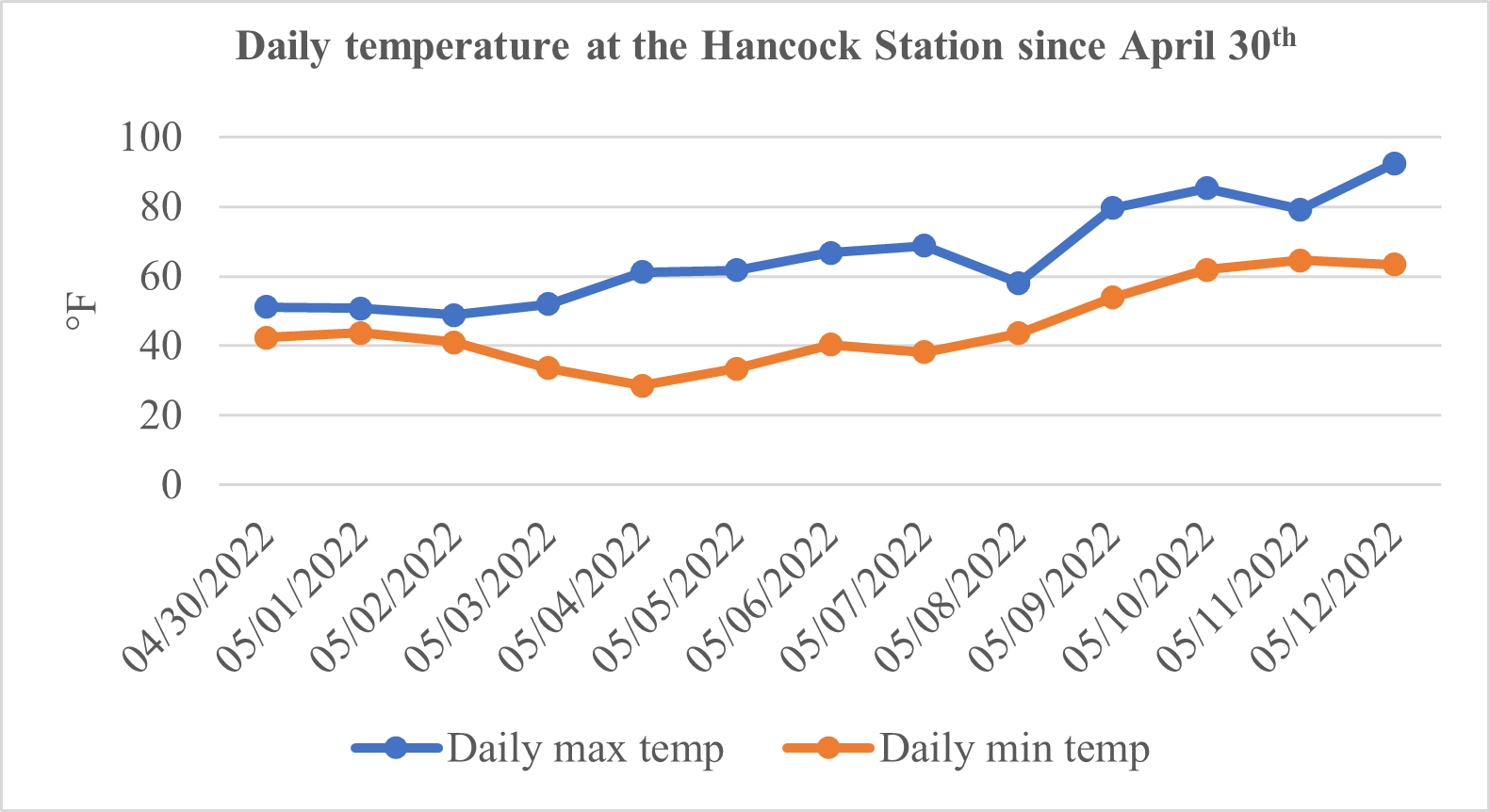 We checked on seed tubers planted in the third week and the last week of April at the UW Hancock Agricultural Research Station, and saw that average sprouts’ length was about 2 to 3 inches (Figures below). The longest sprout was close to the soil surface and should be ready to crack the soil very soon. We expect to hill mid to late next week. 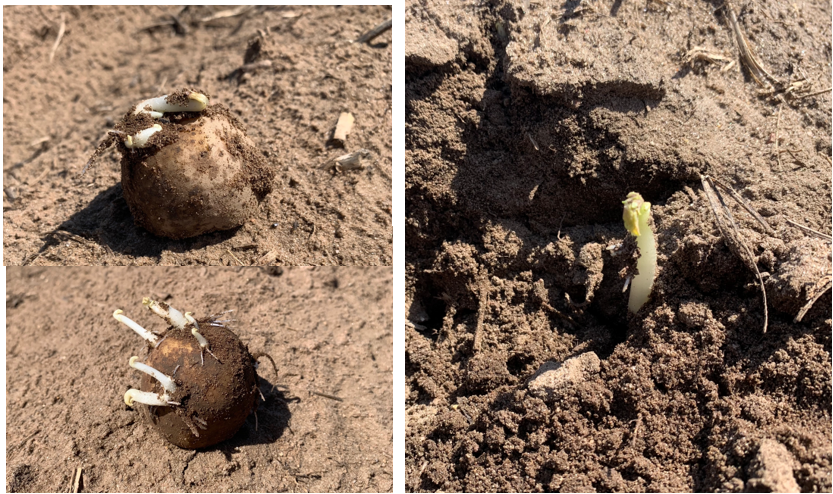 Current P-Day (Early Blight) and Disease Severity Value (Late Blight) Accumulations.  Many thanks to Ben Bradford, UW-Madison Entomology; Stephen Jordan, UW-Madison Plant Pathology; and our grower collaborator weather station hosts for supporting this disease management effort again in 2022.  A Potato Physiological Day or P-Day value of ≥300 indicates the threshold for early blight risk and triggers preventative fungicide application.  A Disease Severity Value or DSV of ≥18 indicates the threshold for late blight risk and triggers preventative fungicide application.  Red text in table indicates threshold has been met or surpassed.  TBD indicates that data are To Be Determined as time progresses.  Weather data used in these calculations will come from weather stations that are placed in potato fields in each of the four locations.  We currently have our Hancock and Plovers weather stations up and running.  We are optimizing our Grand Marsh station, and will add the Antigo station later this month.  Data are available in graphical and raw formats for each weather station at:  https://vegpath.plantpath.wisc.edu/dsv/

In addition to the potato field weather stations, we have the UW Vegetable Disease and Insect Forecasting Network tool to explore P-Days and DSVs across the state.  This tool utilizes NOAA weather data (stations are not situated within potato fields).  In the hypothetical examples, below, I have used a potato emergence date of May 1 and selected a central WI location.  Note that during our recent atypically hot days, we accumulated ~9 P-Days per day.  In using this tool, be sure to enter your model selections and parameters, then hit the blue submit button at the bottom of the parameter boxes. 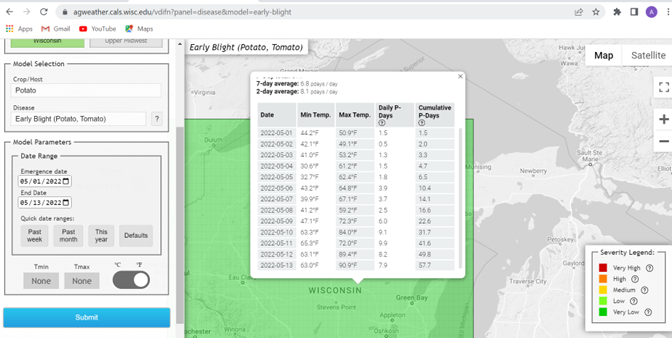 Once thresholds are met for risk of early blight and/or late blight, fungicides are recommended for optimum disease control.  Fungicide details can be found in the 2022 Commercial Vegetable Production in Wisconsin Guide, Extension Document A3422, linked here: https://learningstore.extension.wisc.edu/products/commercial-vegetable-production-in-wisconsin

Read this newsletter as a PDF