The Wisconsin DATCP recently approved a Special Local Needs (24c) label specifically in cabbage for GoalTender herbicide from NuFarm Americas Inc. This label is valid in Wisconsin only and expires on December 31, 2026. The label must be in the possession of the user at the time of application and can be accessed from the DATCP Special Pesticide Registrations web site: https://datcp.wi.gov/Documents/SpecialUses.pdf.

The active ingredient in GoalTender is oxyfluorfen, an herbicide with activity on several common broadleaf weed species such as redroot pigweed, black nightshade and common purslane. This 24c label includes postemergent use on both direct-seeded and transplanted cabbage.

Please be sure to read and follow the use instructions and restrictions on the label carefully.

Please note that we have our 2022 Commercial Vegetable Production in Wisconsin Guide (A3422) available at the link below as a free searchable, downloadable pdf.  This provides information to help you select prophylactic fungicides (conventional and organic) to protect the vegetable crop, as well as treatments for managing insect, weed, and fertility aspects of vegetables in Wisconsin.  https://cdn.shopify.com/s/files/1/0145/8808/4272/files/A3422-2022.pdf

Potato silver scurf is caused by the fungus Helminthosporium solani and is a seed- and soil-borne blemish disease concern which impacts quality in both the fresh and processing markets.  Over the past several years, we have been evaluating approaches to limit negative impacts of this disease through exploration of fungicide treatments, resistant variety development, diagnostics, and improved understanding of fungicide resistance in the pathogen population.  Here, I offer summary of some of our work.  I credit my collaborator, and now graduated PhD student, Dr. Sofia Macchiavelli Giron.  Annual outcomes of our field and storage trials can be found here:  https://vegpath.plantpath.wisc.edu/field-trials/

Potato Silver Scurf and its Management.  Overview: Potatoes are the world’s fourth largest food crop, following rice, wheat, and maize. Wisconsin currently ranks third in potato production in the United States and has been experiencing increasing blemish disease incidence and severity since approximately 2000, with marked impact on quality of fresh market varieties. Silver scurf, caused by Helminthosporium solani, is a blemish disease of potato which affects periderm quality and appearance, impacting marketability and storability. Symptoms of this disease include often blotchy, gray, silver or golden lesions on the tuber periderm depending on variety. The periderm damage caused by this disease can also exacerbate water loss, and hence, yield loss, in storage. Further, the damaged periderm can potentially result in secondary infections by opportunistic pathogens. Most losses associated with this disease are due to fresh market rejections or moisture loss due to damaged skin. At times, blemish diseases can also cause seed quality downgrades.

Disease cycle: The potato-silver scurf disease cycle includes infection phases in both the field and storage domains. Infection begins in the field with one or multiple sources of inoculum including infected seed, or soil, and/or crop debris. The primary source of inoculum is typically infected seed tubers, although some studies have shown evidence of soil being the primary inoculum source. In our recent research in central Wisconsin, our molecular biological screening of the soil and plant material within the agro-ecosystem indicated that seed was the primary source of infection. The fungus can infect developing plant parts (roots and stolons) and ultimately infects daughter tubers. After harvest, secondary infections can occur in storage through different mechanisms. Conidia spread through direct contact to other tubers or through movement of air through ventilation systems. Planting and harvesting dates are an important factor in disease incidence and severity. The length of exposure of tubers to H. solani (from tuber initiation to harvest) has been correlated with severity. Studies have shown that later harvest dates lead to higher disease severity. Improved understanding of pathogen source and infection status will help prescribe optimum timing for treatments or cultural practices to further reduce inoculum and disease.

Host range: While the host range of H. solani is typically limited to potatoes and solanaceous plant roots, the pathogen can develop mycelial growth, conidiophores and conidia (=spores) on alfalfa, sorghum, rye, oats, corn and wheat in senescent tissue after 20 days of incubation in the dark. In addition, mycelial colonization and sporulation was observed on rapeseed, red clover and buckwheat after 5 days of incubation on V8 agar. There was no colonization present on potato leaves, indicating that on potatoes, this pathogen is exclusively associated with below ground plant parts.

Management Strategies: With limited genetic understanding of, and little commercial resistance to, varietal resistance in potato to silver scurf, potato producers have had to rely on fungicides in addition to variably effective cultural controls for management of silver scurf and other blemish diseases. Current management strategies for silver scurf include use of disease-free seed potatoes, crop rotation of three years or greater of a non-potato crop, mitigation of soil moisture, timing of vine senescence with harvest so that tubers are not left in the soil for two or more weeks after defoliation, and fungicides timed at planting (seed-applied or in-furrow) and post-harvest (in some cases). Fungicide evaluation trials for the control of silver scurf and black dot have resulted in variable outcomes in the past, depending on location, application timing, and year.

In our multi-year investigation, we documented the potato silver scurf control benefits of a season-long integrated approach in Wisconsin. Seed-applied fungicides resulted in reduced potato silver scurf, emergence and yield compared to in-furrow applied fungicides. In general, Maxim MZ (fludioxonil, ST) at planting and Stadium (azoxystrobin, fludioxonil, difenoconazole) post-harvest resulted in reduced disease. The effect of application timing on silver scurf severity varied depending on year. Environmental and seed conditions in each year play a significant role in the silver scurf outcome. 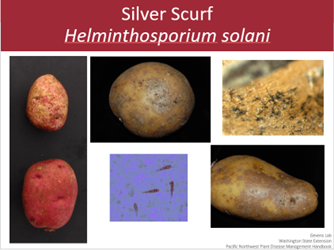 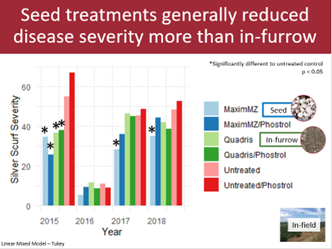 Prior to the substantial increase in silver scurf in northern US potato producing states, the disease was typically and effectively managed through the use of cultural practices, and the fungicide thiabendazole. However, pathogen resistance to this active ingredient was documented after commercial reports of poor control performance. Since thiabendazole, azoxystrobin (a common and useful Quinone outside inhibitor or QoI fungicide) was introduced to the commercial market in the 1990s and has been heavily relied upon for potato disease management for numerous pathogen targets since that time. Due to the mode of action of azoxystrobin and its history, there is a risk for the development of fungicide resistance which might explain the recent increase in silver scurf incidence. Our screening of H. solani from symptomatic potato tubers indicated variation in growth response when treated directly with azoxystrobin suggesting some level of resistance within the pathogen population tested. Similar to azoxystrobin resistance in other ascomycetous fungal pathogens (for example Alternaria solani which causes potato early blight), mutations in the cytochrome b gene can be associated with the phenotype of resistance to QoI fungicides. We’ve sequenced this gene and are looking selectively for the mutations and associated culture responses. These advancements will inform a useful PCR-based tool for rapid pathogen testing to determine H. solani resistance to QoI fungicides.

Previous studies identified potato breeding clone C287 with resistance to silver scurf. We sought to determine the genetic attributes responsible for this resistance for potential integration into breeding programs to limit disease. C287 was crossed with M6, a diploid self-compatible inbred line of the potato wild relative Solanum chacoense, which is susceptible to silver scurf. From the progeny, F1-22 was selected (based on disease resistance and tuber type) and self-pollinated to create F2 plants. There were significant differences among F2 clones, including tuber weight and number, indicating that segregation occurred for these traits in this population. Disease symptoms were not visually apparent, so we applied a quantitative PCR approach (a molecular tool to measure how much of the pathogen DNA was present) to quantify pathogen presence. Preliminary results showed variation in resistance between lines. We will use further tests (single nucleotide polymorphisms or SNPs) to look for quantitative trait loci associated with silver scurf resistance. This will determine whether a marker for silver scurf resistance can be identified in potato.