This week (90 days after planting / 62 days after emergence) my team dug our Russet Burbank and Soraya potatoes under four different nitrogen treatments and found interesting tuber bulking results. The four N treatments are listed below (lbs N per acre):

We noted that Russet Burbank plants under the control treatment (only 40 units of N at planting) progressed much faster than those under higher N rates (by at least 2 weeks), plus the canopy color was much yellower under the control. Plants under 40 N all finished flowering, whereas those under 250 N still had fully blooming flowers.

The three higher N rates (treatment ID 2, 3, 4) were designed to evaluate effects of N fertilizer applied during early July vs. mid-to-late July. We have seen that total yield under the 200 N with side-dressing at mid-to-late July was the highest on the day of sampling. We will make growth curves of plants under the four N rates in order to compare tuber development patterns.

It is very interesting to notice that tuber bulking response of Soraya, a European full-season yellow variety featured by high N use efficiency, is completely different from Russet Burbank. As they showed greatly higher total yield (almost doubled) than RB on the day of sampling, with tuber set per plant and average tuber weight similar to RB. The maximum tuber weight of Soraya was higher than that of RB. Also in the case of Soraya, yield under the control treatment was apparently lower than that under the higher N rates. All Soraya plants under all N rates have completed flowering.

All potato fields of Wisconsin have reached/surpassed the threshold for Disease Severity Values (18) and should continue to be preventatively treated for late blight management. Late blight hasn’t appeared in the US this season (usablight.org), however, when environmental conditions are favorable the pathogen can become active and quickly cause crop destruction. For more information on this disease: https://vegpath.plantpath.wisc.edu/resources/potato-late-blight/

The early blight P-Day threshold of 300 has been exceeded in all potato plantings of Wisconsin. Early blight is active around Wisconsin in the lower and mid-canopies. A listing of details of currently registered fungicides for early blight management can be found in our 2021 Wisconsin Vegetable Production guide: https://cdn.shopify.com/s/files/1/0145/8808/4272/files/A3422-2021.pdf

There is no predicted movement of the pathogen into Wisconsin at this time– as reflected in the recent forecast (for Sunday July 25, 2021) depicted below from https://cdm.ipmpipe.org/. 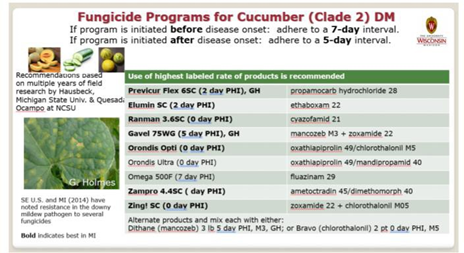 The risk for increased flight activity by late season, potato-colonizing and non-potato colonizing aphid species is upon us in the potato seed growing areas of northern Wisconsin. Risk models available through the Vegetable Disease and Insect Forecasting Network (VDIFN) (https://agweather.cals.wisc.edu/vdifn?panel=insect&model=pvy-vectors) illustrate an enhanced risk for migration and movement of aphids.

Remember, PVY is transmitted by aphid species that feed and reproduce upon (colonize) as well as those that only taste-test (non-colonizing) potato. Colonizing aphids will feed and reproduce on potato as a preferred host. Non- colonizing, winged aphids are those species that do not feed on potato but may taste test several plants as they move through the field, acquiring and inoculating virus as they go. While colonizing aphids are generally more efficient vectors of PVY than non-colonizers, the sheer numbers of migrating, non-colorizing aphids can pose a serious threat by introducing and moving virus into and within a field.

The standard use of at-plant, systemic insecticides on most potatoes has minimized the populations of colonizing aphids so most of the PVY spread occurring in our region is due to transient, non-colonizing aphids. Soybean aphid, grain aphids (e.g. Corn-leaf aphid, Bird cherry-oat aphid, English grain aphid) and aphids in forage crops (Melon aphid, Pea aphid) are the prominent PVY vectors in our region, and the abundance and activity of each of these species has contributed to the model.

Every time winged aphids disperse and migrate, they probe along the way until they find a suitable host plant. This happens in spring and fall and periodically throughout the summer. Current capture data for 2021 from the Suction Trap Network site (https://suctiontrapnetwork.org/data/), illustrate the early summer activity of several species in both southern (Arlington, WI suction trap) and northern (Antigo, WI) locations.

First notice the differences in the total numbers of aphids captured by the scale of the Y-axis on the graph (weekly counts). Greater numbers of captures have occurred in the southern site (Arlington) as compared to Langlade. Notice the early season movement of pea aphid, greenbug, bird cherry-oat aphid in late May and early June that we often see as these species are moving from overwintering hosts to their summer hosts. Notice also the recent (albeit very low) capture of Green peach aphid at the Langlade site. These capture hints toward activity of a potato colonizing species in the region, and scouts and pest management practitioners should be very vigilant to scout fields and look for colonizing species. If small groups of wingless individuals are observed on the under-surfaces of leaves in potato, then insecticide applications should immediately be considered for these fields.

Recall that in our areas, many aphids produce eggs to survive winter on a primary plant host. In spring, eggs hatch and winged aphids migrate to secondary, summer host plants. While most offspring do not have wings and will move only to adjacent plants, winged forms will be produced when the colony gets crowded or in response to poor, or changing host plant quality. These winged aphids will migrate to other plants. Migration in mid-summer (e.g. grain aphids) or late summer (e.g. soybean and pea aphids) when aphids take flight to find overwintering host plants to lay eggs, is when we anticipate this elevated risk. These are the aphids commonly moving through potato fields and spreading PVY, and we anticipate seeing increased captures of these species in the week(s) to come at the Suction Trap Network site (https://suctiontrapnetwork.org/data/).

One generation of western bean cutworm occurs each year, and adult moth emergence usually begins in early July. After mating, females will lay eggs on available plants such as field corn, sweet corn, popcorn, or dry beans, but will also lay eggs on tomatoes, nightshade, and ground cherry. Scouting for western bean cutworm should begin when the first moths are noticed. Pheromone data from the WI DATCP’s Home Pest Survey (https://datcp.wi.gov/Pages/Programs_Services/PestSurvey.aspx), illustrate that the western bean cutworm moth flights usually begin in early July. Pheromone traps have been established by the WI DATCP at sites throughout Wisconsin to monitor the annual emergence and flight of western bean cutworm moths. When trap catch peaks (generally late-July into early August),begin scouting corn, starting with pre-tassel fields.

Scout pre-tassel or just-tasseling fields initially, as females prefer these stages for egg laying. Check 20 plants in 5 areas of the field for egg masses to determine the proportion (or percentage) of infested plants. Use a threshold of 5% or more plants with egg masses as your trigger for a need to consider control. Scouting also allows you to target just the fields over threshold, since the infestation in an area can be patchy, varying greatly from field to field based on crop stage at the time of peak adult flight.

The emergence date of moths can be predicted by calculating growing degree days, beginning May 1, using a base temperature of 50°F. The Vegetable Disease and Insect Forecasting Network (VDIFN) (https://agweather.cals.wisc.edu/vdifn?panel=insect&model=pvy-vectors) site currently illustrates an enhanced risk for adult western bean cutworm flight across central Wisconsin, and these data are consistent with the pheromone capture data from the WI DATCP Home Pest Survey.