Since all potato plants have entered their full bloom to plant senescence stage, which runs about six weeks in July and August, the canopy and roots are fully grown except for indeterminate varieties. Tubers are growing rapidly and are in their log phase of growth. It is important to keep in mind that tubers are 76 to 82% water and that water must come from the environment, rain or irrigation. Irrigation plus rain should be 2 to 2.5 inches per week or about 15 inches for this growth stage. Soil moisture should be at 80 to 90% field capacity, because this is the period when plants have their highest demand for water and are the most sensitive to soil moisture deficit, while daily evapotranspiration (ET) is the highest of the year. Water stress will reduce tuber growth and result in tuber malformations, early dying, early blight, brown spot, and common scab. On the flip side, excessive water will increase water rots of vines and tubers, and create conditions which could be conducive for late blight.

The figure below summarizes the relations of the production periods and the relative growth of roots, canopy and tubers to field capacity or soil moisture. The graphic model is based on a determinate, mid-season variety such as Atlantic.

Change of topic, a team of Chinese researchers recently published a paper in the highest ranking biological science journal (Cell) entitled “Genome design of hybrid potato”. Compared with other major crops, the complexity of containing four sets of chromosomes is the key factor hampering the genetic improvement of cultivated potato. For example, the 119-year-old Russet Burbank is still the biggest processing cultivar, despite it being susceptible to many major diseases. Clonal propagation (planting seed tubers) involves ~10% of the total production costs, and bears a significant carbon footprint for seed tuber production associated with pest control, storage, and shipment.

Actually, ~70% of the natural potato germplasm are diploid (containing only two sets of chromosomes), the extensive diversity of which has not been exploited. The Chinese team utilized the theory and methods of genome design to carry out hybrid potato breeding, re-invented the potato from a clonally propagated tetraploid crop using seed tubers into an inbred-line-based diploid crop, propagated by true seeds. The team developed the first generation of highly homozygous inbred lines and F1 hybrids, which exhibited strong heterosis in growth vigor and yield in the greenhouse. The estimated tuber yield of these F1 hybrids in the first plot trial is 380 cwt/acre, indicating a good yield potential. In addition, the hybrid potatoes are rich in dry matter and nutrient value.

The team concluded that potato hybrid breeding is still in its infancy, but genome design can transform potato breeding from a slow, non-accumulative mode into a fast-iterative one, making potato both a more productive crop and a more nutritious food. They anticipate that hybrid breeding and genome design will transform potato into a non-host to its most devastating disease, late blight, making it a more environmentally friendly crop.

All potato fields of Wisconsin have reached/surpassed the threshold for Disease Severity Values (18) and should continue to be preventatively treated for late blight management. Weather conditions over the past week, especially in areas which received elevated rainfall, were conducive to late blight. Late blight hasn’t yet appeared in the US this season (usablight.org), however, when environmental conditions are favorable the pathogen can become active and quickly cause crop destruction. For more information on this disease: https://vegpath.plantpath.wisc.edu/resources/potato-late-blight/

To help in selection of fungicides for managing late blight in potato in Wisconsin, please review this document, which includes modes of action and resistance risk management groups.

The early blight P-Day threshold of 300 has been met/exceeded in nearly all potato plantings of Wisconsin with the exception of latest plantings in the Antigo area. Early blight is active around Wisconsin in the lower and mid- canopies. A listing of details of currently registered fungicides for early blight management can be found in our 2021 Wisconsin Vegetable Production guide: https://cdn.shopify.com/s/files/1/0145/8808/4272/files/A3422- 2021.pdf

There is no predicted movement of the pathogen into Wisconsin at this time– as reflected in the recent forecast depicted below from https://cdm.ipmpipe.org/ 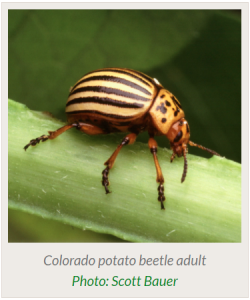 Potato plants can tolerate varying levels of defoliation before they will suffer yield losses. The level of tolerance depends on the plant’s growth stage. Flowering plants can tolerate the least defoliation, (e.g. only 5-10% of total leaf area). Post-flower potato is able to withstand a slightly greater amount of defoliation, but since this is a critical point for tuber formation and bulking, producers and pest management practitioners should limit the amount of feeding done by CPB not to exceed 5-8%. Late season feeding on potato that is beginning to senesce is the least critical period for yield loss. It should be noted that (accurate) estimation of crop defoliation is an exceptionally challenging task. Defoliation estimates are typically 10-15% higher than true leaf area eaten by CPB. To ensure a good representation of damage and associated defoliation, newer applications (e.g. Canopeo – https://canopeoapp.com/#/login), can be useful.

Recall that nearly all foliar-applied compounds should be applied as a series of two, successive applications spaced 7–10 d apart to improve control of staggered life stages. Moreover, several of the reduced-risk compounds require specific spray tank conditions (e.g., pH of water source), companion adjuvants, and timing with vulnerable early stage life stages (e.g., first and second instar). Moreover, several of these compounds (e.g., anthranilic diamides or spinosyns) may have less activity on other key potato pests (e.g., potato leafhopper and colonizing aphids); scouting and economic thresholds for secondary pests will remain a critical component of weekly field management activities. The decision to apply any insecticide for this next generation of CPB should be completed for each field based on scouting results and established economic damage observed in that individual management unit. Second generation management options are available here. 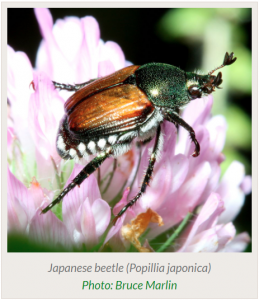 The emergence of adult Japanese beetle is progressing in much of central Wisconsin. Considered the single most important turfgrass-infesting pest in the United States, this is an introduced pest that feeds on foliage or flowers of over 350 species of plants, including fruits, vegetables, ornamentals, field and forage crops, and weeds. Japanese beetle grubs feed below ground and chew on the roots of grasses and ornamentals. As a result, they reduce a plant’s ability to take up enough water and nutrients to withstand stresses of hot, dry weather.

Japanese beetles have only one generation per year. In early July, or around 1,100 growing degree day units, adults begin emerging from the soil. Immediately thereafter, females mate and begin laying eggs. Adult beetles are most active in the afternoon in full-sun. Females leave ornamental plants where they feed and mate, and burrow two to four inches into the soil (under the turf and in mulched areas) in a suitable area to lay their eggs. Eggs hatch in about two weeks, after which grubs begin feeding on the roots of turfgrass and ornamental plants. The grubs grow quickly, and by late-August are nearly full-grown (about one inch long).

As soil temperatures cool in the fall, and the first meaningful frost occurs, grubs begin to move deeper into the soil. Grubs overwinter in the soil about two to six inches below the surface, although some may be a deep as 20 inches. They become inactive when soil temperatures fall below 50°F. In the spring, when soil temperatures reach 50°F, the grubs begin to move up into the root-zone to resume feeding for about three to five weeks. Thereafter, the grubs stop feeding and begin creating an earthen cell where they pupate (i.e., transform) into adults.

Removing beetles by hand, or trapping, may provide adequate protection for small plantings when beetle numbers are low. However, Japanese beetle adults are capable of migrating from other areas, and the presence of beetles on or near a plant will attract more beetles. Consequently, use of Japanese beetle traps often attracts more beetles, and results in even greater, subsequent damage to plants. 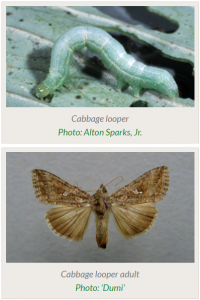 Cabbage looper adults overwinter in the south and migrate to Wisconsin from mid-July through September. In July, female moths lay single white eggs on the lower surfaces of leaves. Female moths can lay 200 to 300 eggs, usually over a 10 to 12 day period. Larvae hatch 3 to 6 days after being laid and begin to feed immediately. Larvae feed for up to 5 weeks before pupating. Moths emerge 10 to 14 days later, mate and lay their eggs, giving rise to the second generation, which causes the most damage to several cole crops.

The cabbage looper often feeds between veins on the underside of lower leaves. Large loopers will make larger holes in the foliage and can burrow through 3 to 6 layers of tightly wrapped head leaves in cabbage. A good indicator of the presence of loopers and imported cabbageworms is fresh frass (droppings) on leaves.

Biological control occurs regularly in Midwest fields and can be highly effective in controlling populations of Cabbage loopers that feed on cole crops. Bacillus thuringiensis (Bt) applied to early instar larvae can be very effective in controlling imported cabbageworms (DiPel, Xentari, othe rformulations). There are more than 20 types of Bt, most of which are highly selective against caterpillars. Bt does not directly affect predators or adult wasp parasites and therefore does not disrupt the activity of these beneficial insects. Target early instar larvae and ensure good plant coverage to improve the effectiveness of insecticides. Spinosyns (e.g. Delegate, Blackhawk, Entrust) are examples of other reduced-risk insecticide options. Spinosans are biologically based materials that are quite selectively active on caterpillar pests but are regarded as safe to beneficials.