This week we collected our last digging data for Russet Burbank and Soraya before vine kill on August 31st. The two varieties were under four different N fertilizer treatments shown below:

Useful information about equipment and facility sanitization: As the field season wraps up and the storage season is beginning, growers should consider adopting a good sanitary practice to thoroughly clean and disinfect all field equipment and storage facilities prior to operational use. We had an extension article on this topic on Page 22 – 25 in the January 2021 Badger Common’Tater. See link here: https://issuu.com/bctater/docs/0121_standard

Summary report about the harvesting season in Wisconsin: As the harvesting season is underway, there are more reports on tuber quality issues. The series of rainfall events in late August caused soil saturation issues and therefore soft rot, enlarged lenticels, poor harvesting conditions have been widely noted in the Central Sands region. For fresh market varieties, there is a high percentage of tuber breaking down once packed. In addition, some growers reported that the heat stress in June with more than a week of daily temperature higher than 90°C has led to load rejections due to hollow heart, misshaped tubers, scab issues, etc. Overall, yield is estimated to be close to average, but quality may be highly variable depending on varieties.

Lastly, the tuber quality issue is being noted in other potato production regions as well. Here I am sharing some fun photos of Russet Burbank from Manitoba (photos courtesy of Gaia Consulting Ltd.) 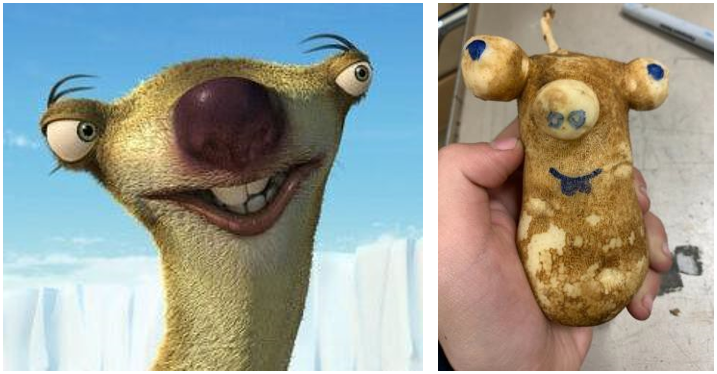 Happy Labor Day Farmers! We thank you for producing food for us!

All potato fields of Wisconsin have reached/surpassed the threshold for Disease Severity Values (18) and should continue to be preventatively treated for late blight management. Accumulations over the past week were ranging from 5-9 DSVs, indicating low to moderate risk from disease-promoting weather. To date, potato late blight (US- 23) was confirmed from commercial potato fields in Portage County on Jul 28, Aug9 and Aug 25. No new reports during this past week.

Outside of Wisconsin, tomato late blight was confirmed in Cocke County Tennessee on Aug 19 on tomato (US- 23), North Carolina on Aug 16 on tomato (strain typing in process); on tomato in Ontario (Haldimand-Norfolk) Canada (no sample submitted for strain determination on Aug 10); on potato in Aroostook County Maine (US-23 on Aug 9); and on tomato in northeastern Georgia (US-23 on Jul 28) (usablight.org). US-23 is typically sensitive to the fungicides in the phenylamide group (including mefenoxam and metalaxyl). The map below, from usablight.org shows the counties in which late blight has been confirmed in 2021. For more information on this disease: https://vegpath.plantpath.wisc.edu/resources/potato-late-blight/.

Cucurbit Downy Mildew Update: Over the past week, cucurbit downy mildew was confirmed in the following locations: NJ (pumpkin), WV (cucumber), OH (pumpkin), MS (cucumber, cantaloupe), and TN (ornamental gourds). There have been no samples of cucurbit downy mildew through our UW Plant Disease Diagnostic Clinic, or my Vegetable Pathology Lab so far this season. No downy mildew has been observed in our sentinel plots in WI. This season, so far, the disease has been documented in AL, CT, DE, FL, GA, IN, KY, LA, MA, MD, MI, MS, NC, NH, NJ, NY, OH, Ontario Canada, PA, RI, SC, TN, VA, and WV. There is no predicted movement of the pathogen into Wisconsin at this time– as reflected in the recent forecast (for Sunday September 5, 2021) depicted below from https:// cdm.ipmpipe.org/

Due to the presence of unique pathogen types (Clade 1 and 2 types with unique host ranges among cucurbits), our improved understanding of the cucurbit downy mildew type that may be in our region can aid in recommending the most appropriate prevention of crop disease and resulting loss.

Basil downy mildew caused by the fungus-like pathogen Peronospora belbahrii has become more prevalent in the Great Lakes region and throughout the U.S. Since about 2007, basil downy mildew has made headlines as a new North American culinary herb disease – with confirmed reports in FL, NC, PA, NJ, NY, MA, NC, KS, MO, and WI (for the first time in 2010). European and South American nations are also dealing with this destructive plant pathogen. In 2014, nearly 40 states reported basil downy mildew from within the continental U.S. The basil downy mildew pathogen can be transmitted on seed, infected plant parts, and on the wind. This particular downy mildew can affect both ornamental and basil varieties grown as herbs. It is suspected that basil downy mildew has moved geographically on contaminated seed or leaves. The spores of basil downy mildew are produced on leaf underside prolifically and can be aerially dispersed long distances. Symptoms begin as non-descript pale yellow leaves which mimic nitrogen deficiency, but typically progress to well defined yellow, angular lesions on leaf surfaces (Figure below). As disease develops, the pathogen’s gray to black spores can be seen on leaf undersides.

The management of basil downy mildew includes planting uninfested or ‘clean’ basil seed, selecting resistant or tolerant varieties (see more info here: https://www.vegetables.cornell.edu/pest-management/disease- factsheets/basil-downy-mildew/), using adequate plant spacing to promote dry plant canopies, and applying fungicides when environmental conditions favor disease. Currently there are no effective seed treatments and hot water seed treatments negatively impact seed quality. Minimizing leaf wetness and humidity will aid in management as the pathogen is favored by moist conditions. There are a limited number of fungicides with registration for use on basil downy mildew, and few with meaningful efficacy in either organic or conventional systems. While not a preferred approach, applying fungicides frequently and starting before first symptoms may be necessary to control downy mildew effectively. Fungicides were effective in experiments with applications started before or after initial symptoms were found. To determine when to initiate a fungicide program, or when to harvest early to avoid losses, growers should routinely scout their fields and gardens for symptoms of disease, and should stay informed of disease reports within the region or state to determine when downy mildew is occurring nearby. Summer is not a time to forget about this disease: unlike most other downy mildew pathogens, e.g. the ones affecting lettuce and cruciferous crops, which stop developing in summer, the basil downy mildew pathogen seems to develop best under moderate to warm temperatures while also tolerating cool temperatures. Basil crops should be disked under or otherwise destroyed as soon as possible after last harvest, or when abandoned because of disease, to eliminate this source of inoculum. Research is ongoing in the U.S. and worldwide to better understand the pathogenicity, host resistance, spread, and control of basil downy mildew. Advances in resistance breeding and seed treatment technologies will greatly aid in improved disease control and sustainability of basil production in Wisconsin and worldwide.