The U.S. drought monitor website updated on June 15th showed that the primary potato and vegetable production region of Wisconsin was under moderate drought conditions. And the drought in the southeastern part of the state was even more severe. 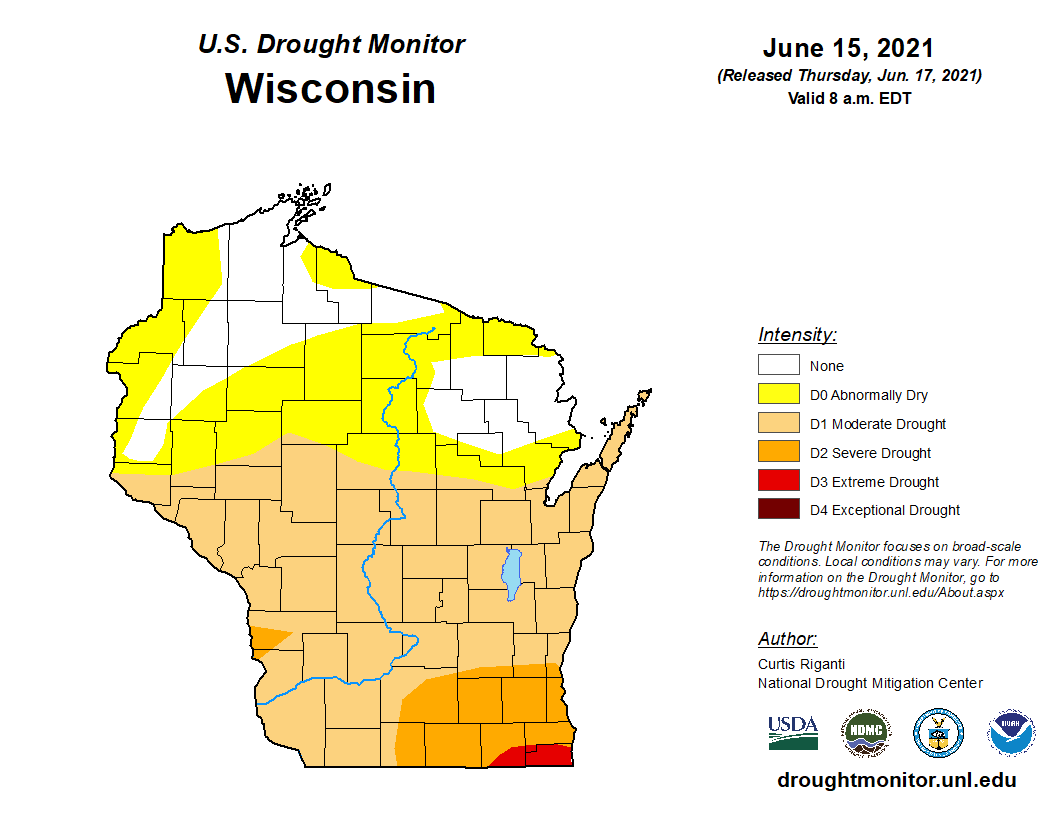 Weather over the last two weeks have been dry and hot across the state. At Hancock, max soil temperatures were above 90°F almost all the time. There was a small rain event (0.18’’) on June 10th, and a 0.64’’ rain event on June 17th. But those rain events were not able to rewet the overall dry soil profile as expected. Our Russet Burbank have 90% canopy closure, Snowden at 80%, Colomba and Soraya at about 70%. Those varieties were planted on April 19th. Tuber growth ranges between hooking and 1’’ big.

Across the state, potato and vegetable crops are doing good, thanks to irrigation. Growers needed to constantly run their pivots in order to catch up with the high daily evapotranspiration (ET). Irrigation event at 0.3’’ to 0.5’’ were common. Some folks were concerned about their soil that don’t have full canopy cover yet to go through cycles of wetness right after irrigation, and then completely drying up after a full day of low humidity and high temperature. Fresh market varieties grown in those soils have started to show scab issues.

Earliest planted varieties in the Central Sands are about 2’’ big. Some plants that suffered from frost damage over the Memorial Day weekend sent up new growth after 5-10 days, and therefore a delay of tuber initiation and tuber bulking were observed. However, according to individual growers, those frost damages were sporadic and showed pocket patterns across fields, which should not cause any widespread concerns.

Generally speaking, it has been a normal year with average to decent vegetable crop growth so far. More worries may rise if the drought conditions persist and high ET days continue during the peak tuber bulking stages.

Current P-Day (Early Blight) and Disease Severity Value (Late Blight) Accumulations.  Many thanks to Ben Bradford, UW-Madison Entomology; Stephen Jordan, UW-Madison Plant Pathology; and our grower collaborator weather station hosts for supporting this disease management effort.  A Potato Physiological Day or P-Day value of ≥300 indicates the threshold for early blight risk and triggers preventative fungicide application.  A Disease Severity Value or DSV of ≥18 indicates the threshold for late blight risk and triggers preventative fungicide application.  Red text in table indicates threshold has been met or surpassed.  TBD indicates that data are To Be Determined as time progresses.  Weather data used in these calculations comes from weather stations that are placed in potato fields in each of the four locations.  Data are available in graphical and raw formats for each weather station at:  https://vegpath.plantpath.wisc.edu/dsv/

The earliest planted potato fields of the Grand Marsh area have reached the threshold for Disease Severity Values (18) and should be preventatively treated for late blight management.  Late blight continues to emerge sporadically in Wisconsin with annual occurrence.  The disease hasn’t yet appeared in the US this season (usablight.org), however, when environmental conditions are favorable the pathogen can become active and quickly cause crop destruction.  For more information on this disease:  https://vegpath.plantpath.wisc.edu/resources/potato-late-blight/

Page 236 in the 2021 Commercial Vegetable Production in Wisconsin Guide (A3422 Extension Document) provides current fungicide details.  For a quick look at a printable listing, click below.  While posted in 2019, it is still relevant in 2021.  The column “Activity of the Fungicides” is particularly useful when considering selection of these water mold/oomycete-specific fungicides. https://vegpath.plantpath.wisc.edu/wp-content/uploads/sites/210/2019/06/2019-Potato-Late-Blight-Fungicides.pdf

P-Days are still under threshold at Grand Marsh and will likely reach 300 within the coming week.

Over the next week or so, most early planted southern and central Wisconsin potato fields will begin routine treatment for late blight and early blight diseases.  Considerations for building these complex programs are typically made in advance of the planting season, however, responsiveness to crop disease in time is critical to best use fungicide resources judiciously. Data from our Wisconsin potato disease trials, including our early blight fungicide study, are available at the UW Vegetable Pathology website to support decision-making: https://vegpath.plantpath.wisc.edu/field-trials/

Downy mildew is now on our local risk radar in Wisconsin with confirmation of the disease on cucumber in the Great Lakes Region in Ontario Canada in mid-June 2021. Pathogen spores were also detected in traps in Allegan County Michigan at the end of May (https://www.canr.msu.edu/news/cucurbit-downy- mildew-spores-identified-in-air-samples-allegan-county) which suggests wider spread movement of the pathogen across the region. Across the US, cucurbit downy mildew has been confirmed in NJ (cucumber), NC (cucumber), MS (cantaloupe and cucumber), GA (cantaloupe and cucumber), SC (cucumber), and Florida (cantaloupe, watermelon, butternut squash, cucumber, yellow squash). https://cdm.ipmpipe.org/ 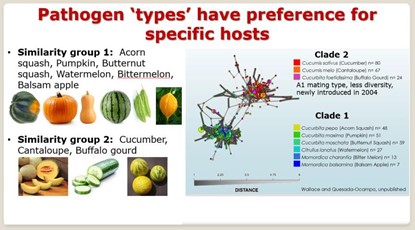 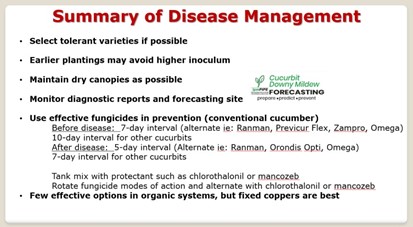 Because of the unique attributes of the new clades, I have summarized unique preventative fungicide programs based on crop groupings. These recommendations are summarizations of work done by many outstanding research and extension professionals including: Drs. Mary Hausbeck at Michigan State University, Sally Miller at Ohio State University, and Lina Quesada Ocampo at North Carolina State University. 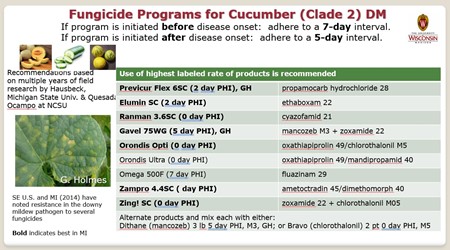 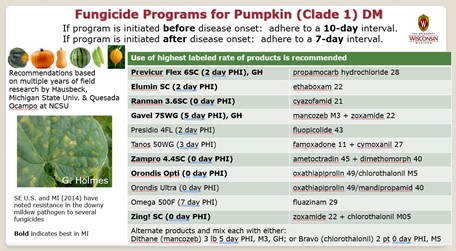 Squash vine borer – (https://vegento.russell.wisc.edu/pests/squash-vine-borer/). The squash vine borer (Fig. 1) is a sporadic pest of pumpkin and squash (e.g. cucurbits). Activity of adult moths and larvae often occurs as the crop is expanding rapidly from late June until the first of August. Resulting damage can be difficult to diagnose prior to significant harm to the plant occurs. In years of heavy infestation squash vine borer can become a significant economic pest in some cucurbit crops.

Beginning in late June to early July, adult vine borers emerge from the ground as adults. In the Midwest the pest typically emerges after 1,000 growing degree-days (base 50°C) have been reached. (Fig. 2. Squash vine borer Degree Day accumulations using a base temperature of 50o F https://agweather.cals.wisc.edu/vdifn). Often, this degree day threshold will closely coincide with full bloom of the common roadside weed chicory (Chicorium intybus L.). In Wisconsin, we often observe populations in early July, however recent temperatures have been sufficiently high to hasten the development of the insects.

The damage caused by squash vine borer larvae is often difficult to detect until the plant wilts and dies in late July and August. Initial signs of infestation are very difficult to detect. Scouting early and often involves searching for entrance holes and frass at the base of vine crop stems.

Advanced symptoms of squash vine borer infestation are quickly wilting plants in the heat of the day. Since wilting may be confused with other pests of vine crops (e.g. bacterial or Fusarium wilts) scouting remains critical. Infested plants may be diagnosed by splitting the base of plant stems to confirm the presence of the larvae. Fields that have been damaged in past seasons have a good chance for recurring squash vine borer infestations annually. Adults may also be easily seen flying in the garden. A careful eye can quickly distinguish the diagnostic coloration and behavior of the day flying adult moths. Currently there are no treatment thresholds for the Squash vine borer.

In Wisconsin, infestation risk can be greatly reduced by planting crops early in the season. Floating row cover placed on the crop when adults are actively laying eggs is an effective method to reduce problems. Understanding when vine borers are present is a critical component to successful management with floating row cover. Synchronizing row cover installation with peak adult activity will reduce damage to preferred host plants. Keep in mind that plants in bloom require bees to pollinate the flowers. Remove row covers daily to allow adequate access for pollination. Planting a trap crop such as summer squash can be an effective means of reducing damage in the primary crop. Trap crops should be planted early to provide a more attractive egg deposition area than less preferred cucurbit species. Trap crop residue should be destroyed before larvae exit vines to pupate, limiting next season’s infestation.

Squash vine borer is very difficult to manage with chemical insecticides since older larvae are protected within the plant stem. The target life-stage for conventional chemical management is newly hatched larvae that have not yet entered the stem. Effective control requires insecticide residue to be in place before and during the egg laying period (1,000 DD50). Two to three successive applications of insecticide 5-7 days apart will adequately control most of the larval borers before entering the vines.