So far the growing season has been going pretty well due to cooperative weather conditions. No particular emergence issue has been reported across the state. In Central Wisconsin, plants are about 6’’ tall at least, and many varieties such as Superior, Atlantic, Dark Red Norland, and Colomba (Figure 1) have started tuber initiation. Seed potato plants in the Antigo area are still making their way out of the soil. Tallest plants are about one inch.

Our plants at HARS have been showing vigorous growth, tallest plants of Snowden and Colomba are about 10” (Figure 2).

Some folks reported freezing temperatures over the long weekend and were concerned about the health of their plants. Potato shoots (stems) are sensitive to freezing temperatures. Symptoms of freeze damage may vary from blackening of the leaf margins (minor damage) to death of all aboveground growth (severe damage). Severely damaged potatoes will send up new growth (shoots) within 10 to 14 days, but this will cause delay of tuber growth and a delayed harvest schedule.

Processing vegetables such as snap beans, peas, sweet corn, and kidney beans are being planted in Central Wisconsin, and people have reported 20% to 80% of completion. The early planted crops have emerged well and people are expecting a good harvest.

Current P-Day (Early Blight) and Disease Severity Value (Late Blight) Accumulations.  Many thanks to Ben Bradford, UW-Madison Entomology; Stephen Jordan, UW-Madison Plant Pathology; and our grower collaborator weather station hosts for supporting this disease management effort.  A Potato Physiological Day or P-Day value of ≥300 indicates the threshold for early blight risk and triggers preventative fungicide application.  A Disease Severity Value or DSV of ≥18 indicates the threshold for late blight risk and triggers preventative fungicide application.  Red text in table indicates threshold has been met or surpassed.  TBD indicates that data are To Be Determined as time progresses.  Weather data used in these calculations comes from weather stations that are placed in potato fields in each of the four locations.  Data are available in graphical and raw formats for each weather station at:  https://vegpath.plantpath.wisc.edu/dsv/

Hotter, drier weather has propped up our P-Day accumulations but drastically reduced the DSVs over this past week.  See graphs on the disease modeling page which visualize these trends. Once thresholds are met for risk of early blight and/or late blight, fungicides are recommended for optimum disease control. Fungicide details can be found in the 2021 Commercial Vegetable Production in Wisconsin Guide, Extension Document A3422:  https://cdn.shopify.com/s/files/1/0145/8808/4272/files/A3422-2021.pdf

This site has evolved over the past few recent years with the goal of easy-access to our archived proceedings from 1988-2021.  Further, we intend to use the meeting site to feature our current year meeting with access to the videos of the presentations.  The tab for “Content Type” (middle of home screen on left – screen shot below) will enable you to navigate between what has traditionally been the hardcopy proceedings which includes:  oral presentation documents, research reports, poster abstracts, and the actual oral presentation slides and/or videos.  We will continue to print hard copies and develop flashdrives of the proceedings as demand necessitates. Our goal is to to provide best access to our educational meeting content as technologically convenient and appropriate.

Cutworms – Black cutworm larvae feed on newly emerged vegetable crops. The worms are active feeders, clipping many seedlings at or below the soil line in a single night. They prefer crops sown as seed (rather than transplants); susceptible crops include beets, carrots, cucumber, leafy greens, melons, peas, potato, pumpkin, snap beans, squash, and sweet corn. If not controlled, these pests can destroy early plantings very quickly once they become large larvae. Black cutworms are particularly problematic to field edges of our processing crops and to fresh market growers and organic growers.

Newly hatched larvae feed on leaves, but are unable to chew entirely through, creating a “window pane” effect. As they mature, they create small pinholes in the leaves; large infestations of cutworms can completely defoliate plants. During the fourth instar, larvae begin cutting plant stems. The ½ inch long later instars ‘worms’ chew through the stem at or just below the soil surface. This type of injury is common during extended periods of dry weather. If plants are larger, larvae may not be able to cut through the stem but will burrow into it below ground level, causing plants to wilt and die.

Historically, the black cutworm hasn’t overwintered in Wisconsin. The adult moth migrates north on storm fronts in early spring, usually in May and early June. Females lay eggs on low-growing vegetation such as chickweed, curly dock, cruciferous weeds, and plant residue. Larvae hatch about 5-10 days later and over the course of a month will pass through six instars (growth stages) before pupating. Larvae migrate from mature vegetation to seedlings when they are about ¾ inch long. About 2 weeks after entering the pupal stage, adult moths emerge, mate, and repeat the cycle.

In Wisconsin, we can observe three to four generations emerge each year. Because we are seeing captures of adults earlier in the spring, we surmise that some late larvae/pupae may be overwintering in southern portions of the state. The Wisconsin Pest Survey (https://datcp.wi.gov/Pages/Programs_Services/PestSurvey.aspx) maintains updated moth counts from their annual trapping survey to aid in timing of black cutworm arrival into Wisconsin and subsequent scouting and treatment windows based on significant captures. Data at the site suggest we are seeing the appearance of a second generation in southern portions of the state, and the Vegetable Disease and Insect Forecasting Network illustrates the same (https://agweather.cals.wisc.edu/vdifn).

Later larvae that have the greatest potential to ‘cut’ stems occur between 350 DD50 and extend through 1000 DD50. Much of the yellow shaded areas across far southern Wisconsin range between 350-450 DD50 – the risk will be increasing across the state. Timely detection is critical for insecticide treatments to be effective or economical. The best way to do this is to monitor for the arrival of the moths, and watch accumulating DD across the state to determine when larvae are reaching damaging stages. Begin treating at the first sign of pests cutting and repeat over two successive weeks to control larvae.  A complete listing of available insecticides: (A3422, https://learningstore.extension.wisc.edu/products/commercial-vegetable-production-in-wisconsin). Economic treatment thresholds for black cutworms have been developed for the following crops; (green bean= 2 larvae/ row foot; potatoes= 4 larvae/row foot; sweet corn= >5% of plants damaged; leafy greens= <3% of the stand affected.

Tarnished plant bug – Tarnished plant bugs (Lygus lineolaris) are 1/4 inch in length, tan to dark brown oval insects with piercing sucking mouthparts. They attack more than 50 different economic crops, but are most damaging to strawberries, peppers, and all bean crops in Wisconsin. These insects are also quite damaging to hemp crops. Feeding by these insects causes poor fruit set and gnarled fruit due to the toxic saliva they inject into the plant. They are highly mobile insects that overwinter in field debris. Large numbers of adult plant bugs migrate out of alfalfa fields when hay is cut.

For both potatoes and commercial beans, take 25 sweeps with an insect sweep net per sample site with at least 10 sample sites per 100 acres. When counts exceed one tarnish plant bug per sweep on a field average, control measures are recommended in potato and snap bean. Lygus bugs are active most of the summer after early-season nymph development (starting at an accumulated 275 DD52).

Colorado potato beetle – (https://vegento.russell.wisc.edu/pests/colorado-potato-beetle/). After the first two weeks of activity of adults and egg masses have begun to be deposited, begin strategically looking for small larvae (1st and 2nd instars) on the crop. To do this effectively, focus the majority of scouting for larvae on the tops of plants. In potato, small larvae will typically move to the newly expanding foliage at the crown of the plant. Larvae are very small at this stage and may not be directly apparent unless the emerging foliage is carefully parted. First instar larvae may be easily confused with dirt or debris until closer inspection. Careful inspection of the crop at this stage greatly enhances your chances for season long management of CPB. As the larvae grow larger general defoliation will first be apparent as small holes forming on upper leaves. Potato beetle larvae are typically very immobile and should be in close proximity to feeding damage. Recall that insect development is directly related to temperature: cool weather slows growth, warm weather accelerates it. The recent warm weather, and forecast temperatures into next week suggest that many egg masses will be hatching into early larvae by mid-week (7-11 June) and population development will be accelerated by these temperatures.

The following product suggestions assume a two-generation lifecycle common to many potato production regions of Wisconsin. The growing season can be subdivided into three specific treatment windows, early generation, late generation, and spring perimeter applications (i.e., reducing populations of colonizing adults). These treatment windows provide a general reference that specifies when individual MoA groups should be used to target larval generations during the growing season. In regions of the state where only a single generation occurs each year, growers may only need to use one MoA group applied early in the season for adequate control of larvae. All compounds included have the greatest activity on small larvae (1st and 2nd instars). 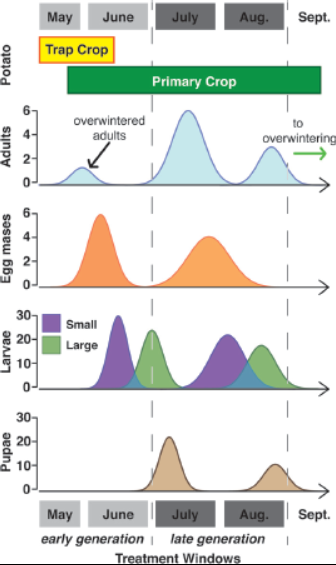 All foliar-applied compounds should be applied as a series of two, successive applications spaced 7–10 d apart to improve control of staggered life stages (e.g., eggs in development that will eclose over an interval of several days). Moreover, several RR compounds require specific spray tank conditions (e.g., pH of water source), companion adjuvants, and timing with vulnerable early stage life stages (e.g., first and second instar). Moreover, several of these compounds (e.g., diamides or spinosyns) may have less activity on other key potato pests (e.g., potato leafhopper and colonizing aphids); scouting and economic thresholds for secondary pests will remain a critical component of weekly field management activities. Although neonicotinoids have been the most common tactic to manage early-season piercing–sucking pests, a diversity of other MoA groups can be used to control these pests in potato. These alternate MoA groups should be incorporated as a replacement for at-plant neonicotinoids to minimize further selection for L. decemlineata neonicotinoid resistance through incidental exposure.