As the weather has been warm and cooperative, planting of potatoes this year has been going very smoothly. So far many farms in the Central Sands region have finished planting, and the others are close to completion. Overall, planting is at least one week ahead of average years. Figure 1 below shows the max / min soil temperature, and rainfall amount at the UW Hancock Ag Research Station. Average soil temperature was between 45°F and 55°F. In the areas north of Hancock, soil temperatures are lower and not as optimal for seed sprouting. Previous publication shows that Russet Burbank plants may emerge in 20 to 25 days at 50°F, but can take more than 40 days at 45°F. Soils need to warm up soon to encourage seed sprouting and growing. 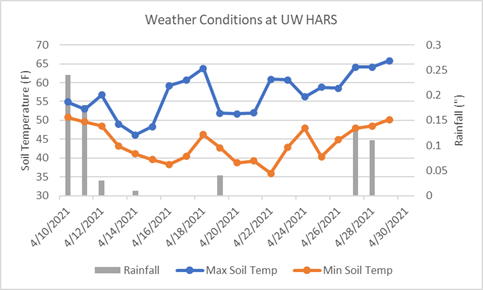 Erratic light rainfall events have been observed since early April, but some growers stated that they needed to irrigate prior to planting due to low/very low soil moisture content. Additionally, lack of snowpack storage in Central Wisconsin this past winter contributed to dry soil conditions too. The US drought monitoring website managed by the University Nebraska – Lincoln showed as of April 27, at least 60% of Central Wisconsin was under Abnormally Dry conditions. 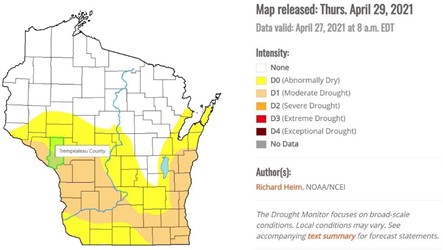 https://droughtmonitor.unl.edu/CurrentMap/StateDroughtMonitor.aspx?WI is a great resource to monitor the status of drought conditions in the state of Wisconsin.

“Nearly one-half of the country – stretching from the Pacific Coast to the Great Plains and upper Midwest – is currently experiencing moderate to exceptional drought conditions, and that is expected to continue and expand”, according to NOAA’s US 2021 spring outlook. It is forecasted that the summer of 2021 will be a hot and dry season.

Other updates on planting, seed potato growers in the Antigo area will start planting next week. Planting of peas in the Central Sands started around April 19, sweet corn will start this weekend, and snap beans will start next week.

Wish everyone a great start of the growing season!

Late blight volunteer survival risk: Potatoes that remain in a field after harvest are known as volunteers and their overwinter survival along with the survival of the late blight pathogen (Phytophthora infestans) can be determined with use of a calculation developed by Dr. William Kirk, former extension plant pathologist with Michigan State University. Dr. Jaime Willbur, current extension plant pathologist, continues to maintain this useful tool which is based on soil temperatures. More information, from the website of Dr. Willbur, follows regarding the risk tool and its accessibility.

Based on these parameters, Arlington and Hancock Wisconsin locations have a high risk of tuber (and pathogen) survival as the soil temperatures at these stations were exposed to temperatures below 27° F for less than 120 hours at 4 inch depth and less than 120 hours at 2 inch depth (noted by orange marker pin on the map below). It will be critical to manage volunteer/weed potatoes in 2021 as environmental conditions favor germination of the unintended crop. Further, earlier season management of late blight may need to be considered given the risk of volunteers from fields which may have had late blight in the previous season. 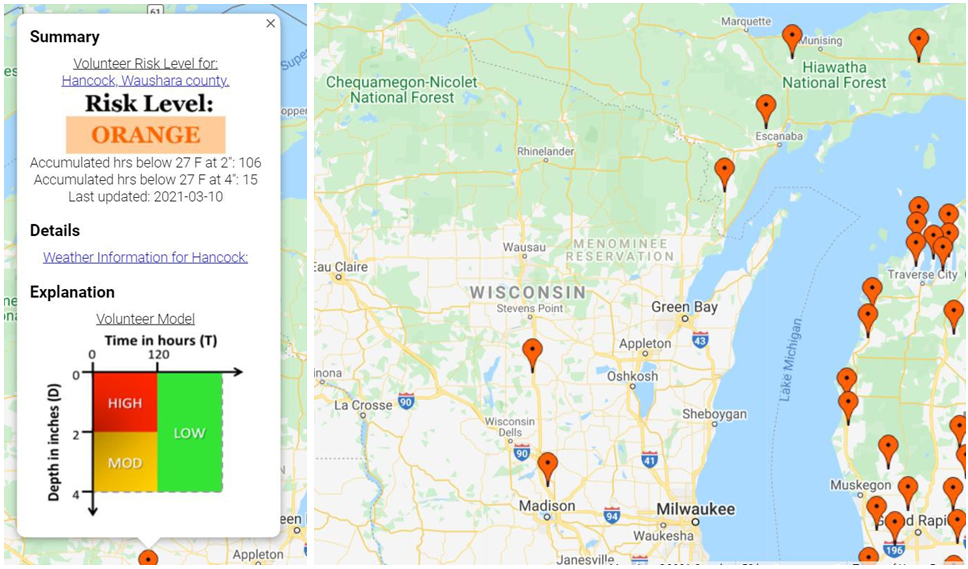