This week I am reporting on our 2020 early season russet variety nitrogen trial. We tested Plover Russet and GoldRush in this study, and we had 100, 240, 300, 360, and 420 lb N/acre as the four N treatments. Those total N amount included N from both the fertilizer and the groundwater. 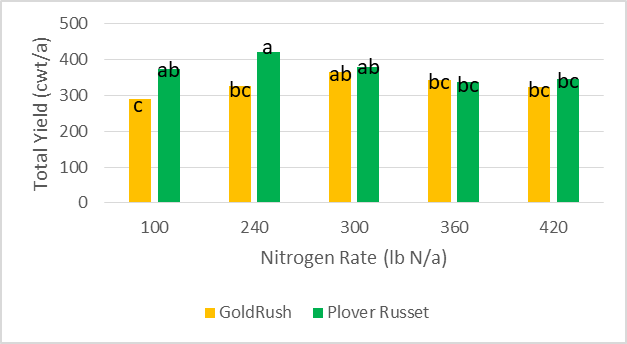 During the growing seasons, we can see clear difference of canopy color under 100 N (left) vs. higher rate at 420 N (right) (photos taken on July 30th).

Figure below shows the yield% of marketable tubers that weighed between 6 oz and 13 oz. 240 lb N/a produced the highest number for GoldRush and 300 lb N/a for Plover Russet. 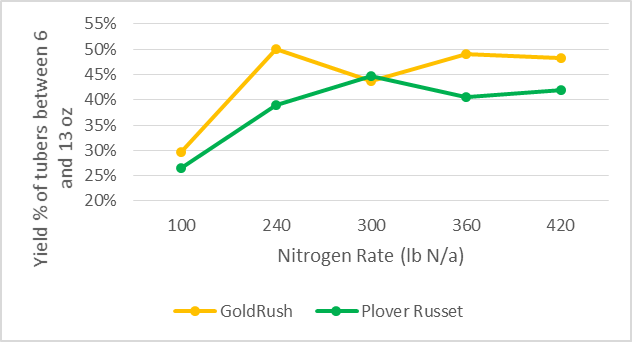 Figure below shows the yield % of tubers that are lighter than 6 oz. Generally lower N rate at 100 lb N/a produced more smaller tubers. 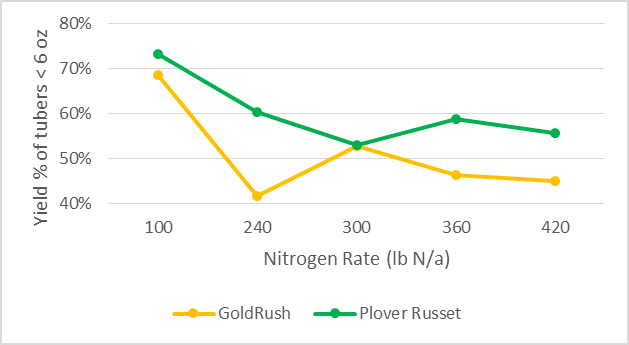 I took a picture of tubers from the two varieties under each N rate at harvest. We cannot easily eye ball difference of size profiles under different N rates. 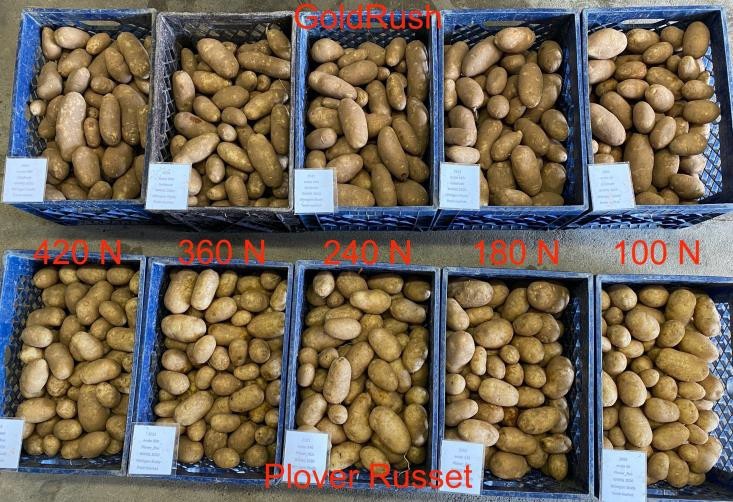 Current P-Day (Early Blight) and Disease Severity Value (Late Blight) Accumulations (Many thanks to Ben Bradford, UW-Madison Entomology; Stephen Jordan, UW-Madison Plant Pathology). A P-Day value of ≥300 indicates the threshold for early blight risk and triggers preventative fungicide application. A DSV of ≥18 indicates the threshold for late blight risk and triggers preventative fungicide application. Red text in table indicates threshold has been met/surpassed. Weather data used in these calculations comes from weather stations that are placed in potato fields in each of the four locations. Data are available in multiple formats for each station at: https://vegpath.plantpath.wisc.edu/dsv/

Late Blight Management: Our DSVs are reported here from emergence to September 12. Over the past week, we saw extremely low accumulations (just 3 DSVs over the course of a week; reminder, max potential DSV per day is 4 under optimum disease conditions). Plantings of potatoes in the Grand Marsh, Hancock, Plover, and Antigo areas should receive routine (~weekly) preventative fungicide application for late blight management. During senescence to harvest, tubers remain susceptible to late blight. In particular, for crops fated for long term storage, continued application of mancozeb-containing fungicide can provide management of the tuber phase of late blight which can happen during spore movement and ‘washout’ events. This late season fungicide treatment is especially important if fields are/were proximal to any known infections, and if the maturity of crops varies greatly within your area (due to risk of foliar late blight and spore availability).

Early Blight Management: PDays are exceeding the threshold of 300 for early planted potatoes in Grand Marsh, Hancock, Plover, and Antigo areas. For more information about fungicide selections, please see the Potato section of the A3422 Commercial Vegetable Production Guide for Wisconsin, 2020. https://cdn.shopify.com/s/files/1/0145/8808/4272/files/A3422-2020.pdf

National late blight update: No new reports of late blight in Wisconsin. Across the US, there were also no new reports that I am aware of over the past week. On Aug 20 US-23 was confirmed on tomato and potato in Chautauqua County in western NY state, So far this season, there have been just two WI confirmations of late blight from tomato (Pierce Co.) and potato (Adams Co. US-23) this season. No widespread movement from these sites as far as I’m aware. Earlier this season, late blight had been reported in North Carolina (tomato US-23), Washington, and it was found in British Columbia, western Canada (Delta and Surrey) overa a month ago now. The site: https://usablight.org/map/ includes reports as they are submitted in the US. Previous reports documented the disease in AL, GA, NC, NY, FL, TN, WA, and WI. Where the late blight pathogen has been tested in the US so far this year, the clonal lineage has been US-23.

Canada, PA, SC, TN, VA, and WV. No forecasted movement of the pathogen in our direction, with prevailing air moving eastward. https://cdm.ipmpipe.org/forecasting/