Starting from the second week of June, we collected water samples from a well that irrigates our research plots at the UW Hancock Ag Research Station (HARS). Depth to the groundwater table is about 20 feet. The water samples were collected right after the pivot was turned on, and 0.5, 1 and 2 hours later. We then tested the nitrate-N levels in these samples, below are the results:

The results showed that within each irrigation event, there was not much variation of Nitrate-N levels in the groundwater with regards to timing of the test. Overall, 1ppm of Nitrate-N in 1’’ of irrigated groundwater equals to 0.23 lb N / acre. So if we irrigated 0.4’’of water on June 13, and there were 26 ppm Nitrate-N in the water, we received 26 ´ 0.4 ´ 0.23 = 2.4 lb of N per acre from this single irrigation event.

Below is a table published by a group of USDA scientists at Stevens Point back in 1995 (the complete publication is available at https://uwveggies.wiscweb.wisc.edu/2020/06/25/how-to-take-n-credits- from-irrigation-water/): 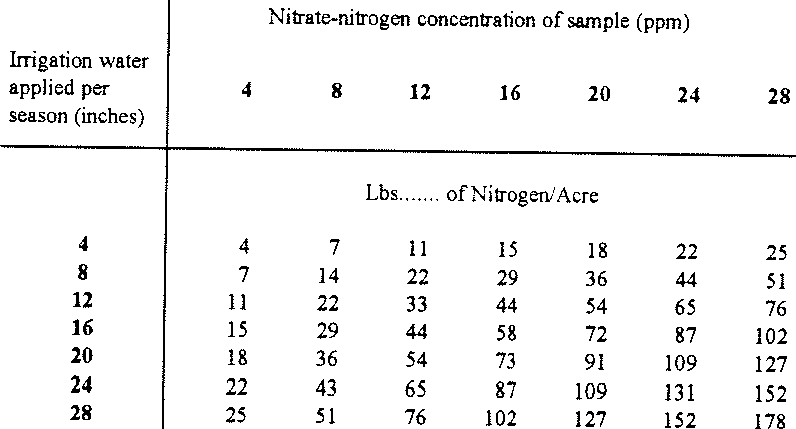 We will keep testing our well at HARS and reporting the numbers in my newsletters this summer. The goal of the research is to evaluate the feasibility of taking N credits from the groundwater in a real-time way and how the N crediting should affect our in-season N fertilization.

Great thanks to Kevin Masarik, water specialist at UWSP, for conducting the instant lab testing, and to my graduate student Guolong Liang, for collecting the groundwater samples.

Another update, this week I launched a website https://uwveggies.wiscweb.wisc.edu/ that compiles all of my extension products. The featured ones such as the online water course, some useful extension bulletins and articles are listed on the homepage. I will also post research and extension updates on potato irrigation and N management, and new variety info on this website. I welcome you to keep checking on the website.

Late Blight Management: We have reached threshold of 18 DSVs for several locations and planting dates over the past week. All plantings of potatoes in the Grand Marsh, Hancock, and Plover areas are nearly at, or have exceeded threshold and should receive preventative fungicide application for late blight management. While late planted potatoes in Hancock are at 17 DSVs, I anticipate that during the next 24 hour period we will accumulate at least one more unit. The accumulations for the past week were moderate to high due to moisture and heat.

Early Blight Management: PDays are exceeding the threshold of 300 for early planted potatoes in Grand Marsh and Hancock areas. Totals are rapidly accumulating with higher temperatures. For more information about fungicide selections, please see the Potato section of the A3422 Commercial Vegetable Production Guide for Wisconsin, 2020. https://cdn.shopify.com/s/files/1/0145/8808/4272/files/A3422-2020.pdf

As a reminder the UW Plant Disease Diagnostic Clinic is open for sample processing, but they cannot take walk-in samples; all must come in the mail or connect with a UW representative to have samples brought directly to the lab. We have a 1-2X weekly drop off from the UW Hancock ARS to Madison. E- mail diagnostics have been on the rise and can be very useful in narrowing causes of challenges in potato and vegetable crops. Please send pics and descriptions to me by email and we can get the dialogue going.

National Late Blight Reports: (https://usablight.org/map/) No new reports of late blight in the US over the past week. Late blight has been confirmed on tomato (FL) and potato (FL and AL) during the growing season of 2020. I will continue to monitor this national database and offer updates here in the newsletter.

Potato Blackleg: Over the past 2 weeks, blackleg has been showing up in some potato fields, especially in cultivars that tend to be most susceptible to the bacterial pathogens. The primary bacterial pathogens that cause potato blackleg and tuber soft rot are Pectobacterium atrosepticum, P. carotovorum, P. wasabiae, and more recently in the U.S., Dickeya spp. Previously, all of these pathogens were grouped in the same genus Erwinia. Dickeya and Pectobacterium affect many host species including potato, carrot, broccoli, corn, sunflower and parsnip; legumes and small grains are not known hosts. Dickeya dianthicola was confirmed in the eastern U.S. in just 2015, causing significant potato losses in some areas. Dickeya appears to spread over long distances via seed potatoes, was first reported in the Netherlands in the 1970s, and has since been detected in many other European countries, and now the U.S. Pictures, below, show symptoms of Dickeya. I acknowledge Dr. Amy Charkowski, Colorado State Univ. for contribution of several photos and some content in this article. 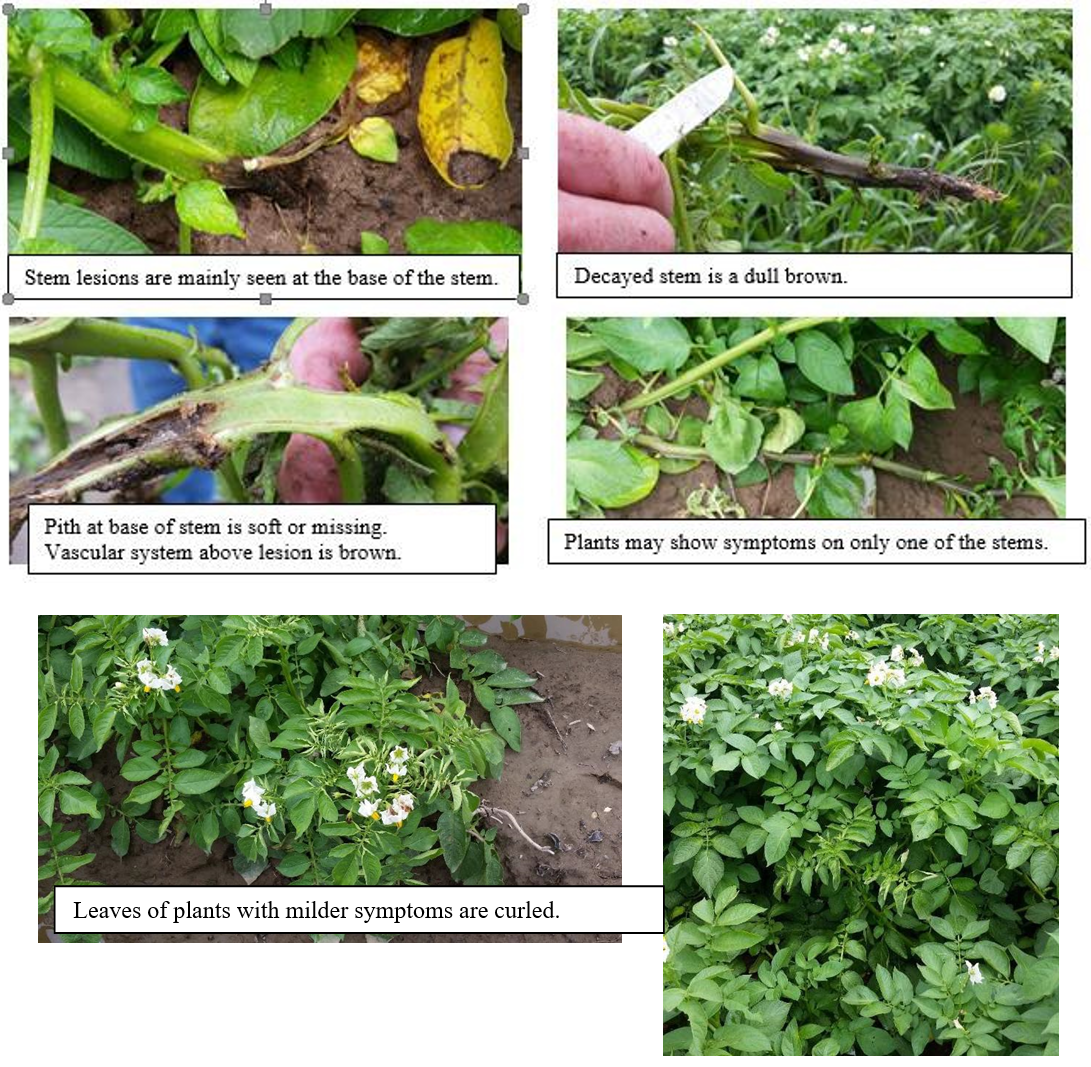 Under the right environmental conditions, infection of seed with blackleg pathogens can result in symptoms including poor emergence, chlorosis, wilting, tuber and stem rot, and darkened or black stems which are slimy, and death. These symptoms result from the cell-wall-degrading enzyme activity of the bacteria within the plant tissues on which they infect.

Blackleg and soft rot bacterial diseases are promoted by cool, wet conditions at planting and high temperatures after emergence. While the pathogens can be spread in infested seed, other sources of inoculum include soil, irrigation water, and insects. Levels of infection are dependent upon seed- handling/cutting techniques, soil moisture and temperature at planting and emergence, cultivar susceptibility, severity of infection of seed, and potentially, amount of bacteria in irrigation water, cull piles, or other external sources. Sanitation and disinfesting of potato cutting equipment and proper handling reduces spread and aids in control of the pathogen. Treating seed to prevent seed piece decay by fungi can also contribute to blackleg control. Since the pathogen does well in cool, wet soils, avoid planting in overly wet soil. Crop rotation away from potato for 2-3 years for Pectobacterium and less than 1-2 years for Dickeya species will help control this disease as the bacteria do not survive well in soil.

While seedborne or vascular blackleg cannot be reversed with applications of fungicides or bacteriacides, spread of the bacterial pathogen from infected to healthy plants and aerial stem rot may be managed in the field with fungicide tank-mixes which contain copper. Remember that the pathogen is inside of the plant (until severe symptoms develop) and copper treatments are not internalized.  Most often, conditions which favor plant to plant spread include high winds and driving rains or heavy overhead irrigation.

Field control of aerial stem rot is challenging. Copper containing fungicides such as Kocide can provide some control of aerial stem rot, and can aid in managing bacterial infection after the crop has suffered hail or driving rain/wind damage. However, note that results of these approaches have had varied success throughout the U.S. In work by Dr. Dennis Johnson of Washington State University, the famoxadone+cymoxanil (Tanos) plus mancozeb tank-mix alternated with mancozeb+copper hydroxide (ie: Kocide) was an effective chemical tool in reducing aerial stem rot in potato.  Irrigation management to reduce excess water also greatly enhanced control of aerial stem rot. Copper hydroxide applications alone did not have as effective of control as Tanos+copper hydroxide. As Tanos is also an excellent late blight control material, its use as we surpass DSVs of 18 at this time offers an appropriate program for control of both diseases.

Although disease symptoms are often indistinguishable from those of the more established blackleg pathogen Pectobacterium spp., Dickeya spp. can initiate disease from lower inoculum levels, have a greater ability to spread through the plant’s vascular tissue, are considerably more aggressive, and have higher optimal temperatures for disease development. Dickeya is not a good soil survivor (generally <2 years) and rotation out of potato for at least 3 years will greatly reduce the disease. Dickeya and Pectobacterium thrive in water and low oxygen, and therefore over-irrigation, poor drainage or excessive rain will spread Dickeya and Pectobacterium. Both pathogens can spread after severe storms.

Generally, disease caused by Dickeya spp under warm, wet conditions leads to stem rotting with symptoms similar to those of P. atrosepticum. Under conditions with lower humidity, less rotting is observed with Dickeya spp but symptoms such as wilting, increased leaf desiccation, stem browning and hollowing of the stem can be present. Tuber soft rot, from either pathogen, ranges from a slight vascular discoloration to complete decay. Affected tuber tissue is cream to tan and is soft and granular. Brown to black pigments often develop at the margins of decayed tissue. Lesions usually first develop in lenticels, at the site of stolon attachment or in wounds. Symptoms caused by Dickeya spp. tend to develop when temperatures exceed 25ºC (77ºF), while Pectobacterium predominate below 25ºC.Recent studies showed that Dickeya spp., particularly at temperatures of 27ºC (80ºF) or above, cause more severe rots than atrosepticum and are more likely to produce a creamier, cheesy rot.

Dickeya dianthicola, the new blackleg pathogen, has the ability to remain dormant in tubers when temperatures are low (for example, at harvest time and in seed storages). Tubers infected with this form of Dickeya look healthy at planting, but the disease develops when soil temperature increases. Seed tubers may rot in the soil, causing poor emergence, or infected plants may emerge that eventually die but not before spreading the disease to neighboring plants.

Cutting seed will spread Pectobacterium within a seed lot. After several years of specific testing, Dickeya has been found to NOT spread by standard cutting approaches. If cutting seed, it’s important to ensure that the cut surfaces are suberized prior to planting to avoid new infections. Dickeya may be managed through biosecurity measures and on-farm precautions such as decontamination of farm machinery, eliminating plant debris and alternative hosts, and avoidance of mechanical harvesting during the early phases of pre-basic seed tuber multiplication.

Growers should make sure to thoroughly sanitize seed cutting equipment and planter between seed lots to mitigate pathogen spread. Seed should be warmed prior to planting so that it is approximately the same temperature as the soil, and to reduce water condensation on tubers. Bacteria cannot enter plant tissues unless there is a port of entry (for example, un-suberized cut surfaces of the seed tuber, or bruises) and a film of water or a wet surface. At harvest, growers should reduce the chances of inflicting damage to the skin such as cuts and bruises. If soft rot is present in a portion of the field, this part of the field should not be harvested. In addition, harvesting equipment should be sanitized between lots. Improved storage management can reduce bacterial load on tubers and tuber rotting. Both physical (especially hot water treatment) and chemical methods have been explored with limited success.

Dickeya grows slowly or not at all at seed storage temperatures, so if the crop looks good going into storage, it will likely not decay in storage due to Dickeya, but the bacteria will likely cause disease and spread the next year if infected potatoes are planted.

Testing for Dickeya and Pectobacterium is available using new standard polymerase chain reaction (PCR) assays. Our UW Plant Disease Diagnostic Clinic can provide these tests. Blackleg and blackleg-like symptoms, so far this season, have resulted in diagnoses of Pectobacterium spp. in some cases, as well as Dickeya dianthicola in few cases.